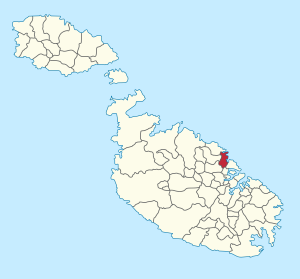 Ġebel ġol-Baħar is an alleged megalithic temple located underwater off the coast of St. Julian's, Malta. The site was identified in 1999 by retired real estate investor Hubert Zeitlmair,a follower of Zecharia Sitchin, but it was never studied properly and archaeologists are not convinced that the site is actually a temple. [1] Hubert made a youtube video describing his discovery here.[2]

The site is located on an underwater plateau approximately 2 km off the coast of St. Julian's. The plateau is 900 by 500 metres long, and its highest point seems to be man-made, and is 19 metres below sea level.

The site contains large boulders which Zeitlmair believed to be man-made and not natural, and which are covered in vegetation. Zeitlmair describes it as consisting of a cluster of three stone circles with 'rooms' with a diameter of 9 to 11 metres, with parts having a height up to 6 to 10 metres. An 'avenue' goes up to the entrance of the structure, which faces east. Tracks on the seabed resembling cart ruts were also observed on the site.

The site was discovered on 13 July 1999 by Shaun Arrigo and his brother Kurt, who were working under the instructions of Hubert Zeitlmair, a retired German real estate investor interested in pseudoarchaeology. The discovery was reported in the local media in October 1999, but after some time interest died down. Further explorations of the site were conducted by Zeitlmair in November 1999 and May 2000.

Structures that resemble megalithic temples have been discovered on the seabed in Maltese waters. These are currently being studied to establish as this discovery has been considered to be of great archaeological importance. For thousands of years these underwater structures have been untouched by the hand of man. The temples are still in the condition of the time when it was destroyed.

Building intricate megalithic structures is not thought to be the work of primitive grunting cave inhabitants or hunters and collectors. Instead, the megalithic temple clock, calendar shows that great master architects were on earth building monuments at a time when the sea was much lower. The construction of the structure indicates knowledge of astronomy, engineering and architecture at a much higher level than inhabitants of that time period have so far been given credit for.

The finding of these stone circles (temples) suggests a need to reexamine the construction period of megalithic structures. This discovery could change the dating from these megalithic structures from Neolithic (New Stone Age) into into Paleolithic (Old Stone Age). The stone circle-location indicates that they were built during a time when the Mediterranean was not a Sea at all The current theories suggest that the oceans were about 175-225 meters lower during the last Ice Age. Some theories also suggest that the Mediterranean Sea was only a series of two deep bays during the last Ice Age. The last Ice Age, after building up for around 200.000 years, appears to have ended abruptly around 10.000 – 12.000 years ago. The massive amounts of ice melting associated with other climatic events resulted in tidal waves and in consequence flooding of coastal regions and an overall ascending sea level. [3]

Zeitlmair believes that the temple was built by aliens in around 10,000 BC to 12,000 BC, and was submerged at the end of the Ice Age during the Genesis flood narrative. He states that he has been guided by his "primeval ancestors, namely... the God Pa.tha-i-da.na Asu.ara tSi.dha, and the Goddess Ashtar-tara Queen of Atlantis who he met on Malta. His questionable judgment does not fit within Malta's prehistoric chronology, as the earliest known human habitation of the island began in around 5900 BC.

The site was given the name Ġebel ġol-Baħar, meaning "Stones in the Sea" in the Maltese language. It has also been linked with the island of Atlantis, and Zeitlmair has published a book about this in German.[4]