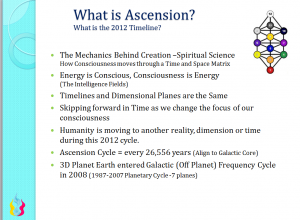 Ascension, also known as Spiritual Awakening, is a simultaneous increase of Expanding Consciousness that occurs when our spiritual-energetic bodies connect into our physical bodies. Generally, the catalyst for spiritual Awakening is discovered through the process of progressive Kundalini activation that starts in the base of our spine and moves the intelligent energies up the spine and into the Crown. As a human being undergoes the Awakening process, which can progress gradually over many years, that person shifts into perceptions of higher consciousness, which can include increased awareness of energy in the environment, perceiving multidimensional realities, sensing extradimensional entities and feeling a direct communion with God and the interconnected energy that exists between all things.

Ascension is a change in Spectrum of Frequency through Kundalini awakening and a change in the focus of our Consciousness. Ascension is about moving our Consciousness from one reality to another. Since reality is a dimension, what we are undertaking is essentially a full dimensional shift. To go through this shift we must adjust our way of thinking and being to that which is in alignment with our soul purpose and true divine essence.

Ascension is the complex quantum mechanics governing the movement of consciousness through time and space. Consciousness is energy, as well as, energy is intelligent consciousness. When energy shifts, so does our consciousness. Time and space as we have known on planet earth is changing, and we are moving into a future timeline. Through gradual exposure to frequency activation of various stellar bodies, the planet is transformed into higher dimensional and frequency planes of existence. One can consider the multidimensional model of our reality through the study of the Universal Time Matrix and the Universal Tree of Life. The shift of frequency forces all of the planetary inhabitants to shift into the newly exposed planetary frequencies and adapt to the accumulative impact of the shifting energies. All humans have a unique Blueprint and pace to keep aligned with the planetary frequencies. Some will adapt to these frequencies while embodied on planet, while others may not. The choice lies with each of us and is directly our responsibility. We can participate or not with our personal evolution process. All that is required from the Ascension process is participation at the level you are able and that attention and focus is placed on one's heart with a desire to know the true self.

As we develop Self Awareness which is the knowledge of the Self, we are developing the right relationship to the Self, and thus we can better develop our relationship with God Source. We cannot know the highest expression of our nature, until we know the deepest inner contents of our own being. Self study is self mastery and is the pathway to expanding Consciousness and awakening Kundalini.

See Where Can I Start?

The Ascension Stages are about the bringing of layers of light, the Kundalini force existing within the levels of our spiritual bodies (our Multidimensional God Selves) by descending these layers into matter and anchoring them into the physical plane of reality. Simultaneously, Ascension is a shift in energetic Spectrum of Frequency patterns held in a dimensional space which, when absorbed and activated into the layers of the planetary and human bio-energetic field, activates its DNA Silicate Matrix template instruction set. This catalyzes a chain of events that creates a complete transformation and transmutation of various patterns and programs held in the energetic templates of the Human Soul’s journey within a cycle of evolutionary time. When activated, these patterns begin to shift, re-emerge and clear from the layers of experiences coded into every cell and memory pattern held as an energetic vibration within the bodies. This part of the biological ascension process may manifest physical, mental and emotional Ascension Symptoms as well as the spiritual crisis of the Dark Night of the Soul.

Emotional clearing is the main process we will experience and be acutely aware of as we shift through the Ascension. Since emotional pain and imbalances are responsible for our states of dis-ease, many of us will experience illness or physical releases of pain clearing from our bodies. Some of this clearing is for your karmic, genetic or ancestral soul lineage. Some of us as lightworkers, have chosen to clear states of imbalance for the collective or for a specific group, and will feel this movement of energy transmute through us, as our energetic being is acting as a cosmic filtration system for the greater whole.

Also, as these painful patterns are removed from the soul record, the clearing recodes our DNA so it can hold more light, thus sustaining our new frequency and our state of increasing higher consciousness and multidimensionality. As we hold this greater light and advanced genetic package in our bio-energy field, it enables others through the principle of resonance, to vibrate at the increased frequency rate and activate their own inner potential and divine inheritance towards Ascension. [1]

The 5D Ascension is the original evolutionary schema or Ascension Plan for the planet Earth at the end of the 2012 Timelines or at the end of the Ascension Cycle, or the end of an Age of Humanity. This original plan was aborted by the Krystal Star Guardians, and in my knowledge, I was shifted from my original Ascension mission in 2004 to learn how to best work for the Guardian Aurora teams who were active building Krystal Star hosting architecture for planet earth. In 2005 I was made aware the original plan was aborted and councils disbanded and reassembled to work on the new mission upgrades, called Ascension Plan B.

The elemental re-encryption process of this Avatar of Ascension (AOA) project as a part of the Aurora Guardian Families is an adjustment that actually changes the coordinates of your birth blueprint and its genetic imprint on the flesh. When we incarnated into 3D we had to accept huge miasmic package that is attached to the collective human race mental bodies on this planet. These are called “Negative Forms” or “Shadow” or “Phantom Sun” bodies. These phantom bodies are what connect humans to the timeline of the (911 Timelines), Armageddon Software or the negative alien agenda NAA. The transduction sequence is the definition of when the “God Spark” connects to the core manifestation body (12 Tree Grid) which projects out the elemental physical manifest body Three Layers of Ego. As we know a major project of the AOA Aurora is to “re-encrypt” the elemental structure of our bodies, as well as anchor the architecture to build the unity source code platform. This changes the false 911 Timelines architecture and is what the work of this ES community is in laying the template of the Law of One (LOO) in the GSF Ascension Timeline. This timeline exists in the Aurora time continuum. See Aurora Re-encryptions. [2]

4 Planetary Rounds = 1 Planetary Cycles = 1 Astrological Age = Aeon = 26,000 (26,566) years = precession of Earth’s axis of rotation with respect to inertial space.At the end of every cycle, we become aligned to the galactic core; Stargate portals open (See Planetary Gates, and we are eligible to proceed with an Ascension timeline.

Refers to the precession of Earth's axis of rotation with respect to inertial space. A complete precession cycle (One Astrological Age) covers a period of approximately 25,765 years, the so called Great Platonic Year, during which time the equinox regresses over a full 360°. The precessional movement also is the determining factor in the length of an Astrological Age or Aeon. (Note that there are 12 Zodiac Archetypes that are each of the 12 Astrological Ages. We are moving from the Age of Pisces to the Age of Aquarius.) The Precession of the Equinoxes is caused by the differential between the gravitational forces of the Sun and Moon on the Earth.

The ancients called this circuit path made around the galactic equator, the Gate of the Gods or The Golden Gate. The Orion constellation sits in the opposite direction, which would be considered the anti-galactic center. The ancients called this circuit path the Gate of Man or The Silver Gate. Ophiuchus and Orion are mirror images of opposing polarity. Together, they represent the ascending path through the Gate of Man meeting at the Gate of the Gods. The many Ascension stages we endure to reach our spiritual Magnum Opus, are the stages of humanity moving through these sequences of consciousness gateways. We all incarnate as earthly beings that evolve through the Precession of the Equinoxes. This takes us through the consciousness realms moving through the ecliptic path of the Gate of Man to eventually complete the evolution cycle, which intersects at the Galactic Center. Once we unify the consciousness experiences through the Gate of Man intersecting with the Galactic Equator at Ophiuchus’ feet, we are potentially given access to The Golden Gate. This allows us to proceed on the Ascension path to become resurrected eternal spiritual beings unified with the Cosmic Holy Spirit. From our solar system the Galactic Center lies visually along a line that passes through The Golden Gate. This is the Gate to Eternal Life which pours out the Universal Elixir that opens at the end of Precession Cycles. The Golden Gate is located on the circuit path, where the two great celestial spheres intersect together that create four quadrants. The quadrant is one of four circular sectors in the equal division of the planetary sphere. The first great circuit is the path of the Sun through the zodiac made in its annual cycle. The other is the circle path made from the center of our Milky Way galaxy called the galactic equator.The intersection point made between the two circuits located between Taurus and Gemini constellations is known as The Silver Gate. The intersection point of the two circuits between Scorpio and Sagittarius constellations, right under Ophiuchus right foot, is known as The Golden Gate. [3]