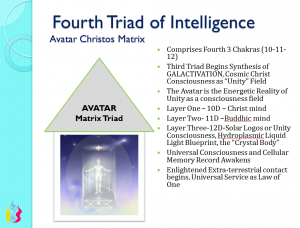 A Christos Avatar is a term used to describe a 12 Dimensional simultaneously conscious being, the highest expression of consciousness of the original human divine blueprint. This is the state of being of a true christ consciousness (12 DNA strands or Silicate Matrix). We all have an Avatar Christos future self and we can call upon this aspect of our identity for support in our personal ascension. This embodied "Christos" is the triad form in the levels of our 10-11-12 Dimensional mind matrix. This is also known as the Universal level of consciousness.

To communicate with the Avatar Christ frequency on the earth, we must build our 12D Shield and absorb the 12D Ray into our Lightbody through the 12 Tree Grid. When we develop our Avatar Christos embodiment the next stage is Hieros Gamos which joins the inner Christos-Sophia in sacred marriage with the Eternal God Source.

This timeline in the destruction of the planets of Lyra is where seed of the Galactic Wars began that are representative of the wars over human DNA and consciousness, the war of that the Anti-Christ consciousness has waged against the Christos consciousness in this Universal system. The Seedings of the Root Races on this planet have been to re-assemble the original DNA and reclaim that which was lost in the Lyran Wars with Orion Group and subsequently, the Reptilian races. The 12 Tree Grid was designed with the Lyran-Sirian's to help reassemble the original Avatar Christos Silicate Matrix of the human being in the lower Harmonic Universes. Essentially this is going into the past Timelines to retrieve code in order to change the destruction in the future timelines from the Orion Wars.