Difference between revisions of "Cartwheel Galaxy" 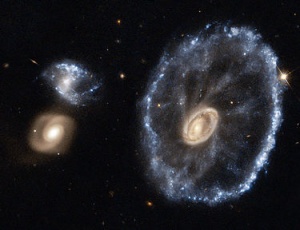 The Cartwheel Galaxy (also known as ESO 350-40) is a lenticular galaxy and ring galaxy about 500 million light-yearsaway in the constellation Sculptor. It is an estimated 150,000 light-years across, has a mass of about 2.9–4.8 × 109 solar masses, and rotates at 217 km/s. It was discovered by Fritz Zwicky in 1941. Zwicky considered his discovery to be "one of the most complicated structures awaiting its explanation on the basis of stellar dynamics." An estimation of the galaxy's span resulted in a conclusion of 150,000 light years, which is slightly larger than the Milky Way.

The unusual shape of the Cartwheel Galaxy may be due to a collision with a smaller galaxy. The most recent star burst (star formation due to compression waves) has lit up the Cartwheel rim, which has a diameter larger than the Milky Way. Star formation via starburst galaxies, such as the Cartwheel Galaxy, results in the formation of large and extremely luminous stars. When massive stars explode as supernovas, they leave behind neutron stars and black holes. Some of these neutron stars and black holes have nearby companion stars, and become powerful sources of X-rays as they pull matter off their companions (also known as ultra and hyperluminous X-ray sources).The brightest X-ray sources are likely black holes with companion stars, and appear as the white dots that lie along the rim of the X-ray image. The Cartwheel contains an exceptionally large number of these black hole binary X-ray sources, because many massive stars formed in the ring.[1]