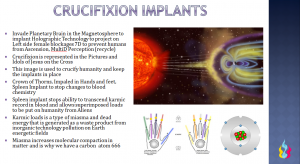 The pain upon the planet was immense, as the deepest trauma of suffering is when a being is fully disconnected from the Soul/Source of Creation. Our planetary logos was invaded with multiple mutations of alien Mind Control programming while siphoning our life force to other planets that serve alien agendas. One of the largest lies promoted to divide our race is the War over False Gods. The false archetypal story of a Crucified Christ figure is a mockery to further enslave humans into believing in a salvation model through a Crucified Christ. It represents the tortured human being, as we are all the Christ, and we have been crucified/implanted as our planet was invaded. These structures are called Crucifixion implants. These Crucifixion implants are tangible control structures placed in the 7th dimensional logos, and therefore it is in our individual bodies, in the 7th Chakra, its complex, meridians, and the entire left side (our female spirit) of our bodies. We are not aware of these implants until we open the 7th Seal and start connecting this part of our 7th layer light body to our personal consciousness field. See Inverted 7D Violet Ray. [1]

The Wounds of Christ are karmic blood miasms in the planetary body and human bodies manifested into genetic distortions as a result of embedded crucifixion inserts that were placed in the planetary brain and collective human race body. These Holographic Inserts misdirected and stole the planetary life force energy and body parts belonging to our spirit. The false crucifixion inserts are how our planetary collective mind was invaded to reflect itself with the salvation model of a crucified deity, which was designed to spread the NAA's violent religions on the earth. Crucifixion represents the consciousness enslavement of humanity to repeatedly recycle their Souls from karmically bound physical bodies and distorted blood records, as a result of the Wounds of Christ. The crucified group Consciousness bodies were used to feed the artificial creations or Phantom Matrix spaces made by Controllers to serve their enslavement agenda on the earth. This is surfacing now to be recoded into alignment with the higher structure of Universal Laws serving the God source divine purpose, and take account of the abuses and crimes committed from their misuse within the Controller and NAA groups that have instigated and wielded religious wars and stealing consciousness power from others in the past Dark Age. This time begins a phase of Restoration which is about returning and reclaiming the Christos-Sophiaianic Intelligence to the earth, and returning the spiritual bodies back to the planet and the rightful owner of which it belongs to.RRO[3]

Because so many humans on this planet have belief system based on a "Cross/Crucifixion" theology based upon the Negative Alien Religions, the energetic cause and effect was disastrous to the expansion of humanities consciousness to achieve liberation, sovereignty and Godhood in the Ascension cycles. Certain beings agreed to incarnate (The Reedemers) and alchemically transform the energetic manifestations, the implants and the holographic architecture of this distorted belief pattern that sacrifice was necessary to appease God. This required much soul retrieval and soul healing work on a planetary scale. These suffering souls, having being killed over the wars over God, or made as a blood sacrifice, were the energetic power source harnessed to retain the crucifixion insert and its belief systems architecture. One of the main systems of planetary control is the religious fundamental Christian programming. It was these programs that were manipulated to condition the planetary field and the collective human mind into believing these as Truths and revelations from God. These were the mind control manipulations to worship a False God, and the energetic results were vampiric to the group human divine soul.[4]

Heavy coordinate points that cross into and flood the energy tributaries into the Axiatonal Lines from the 4th and 7th Dimension are being repaired. Since the planetary 7th dimensional axiatonal line is the main disruption of the false christ Crucifixion Implants this has been a primary repair project. The 7th ray (Violet RayFlame) is transmitted through the planetary 7th Axiatonal lines and is being recoded. Previously this false crucifixion energy implanted in the 7th Axiatonal line was feeding another false program being used in the Astral plane which was like a mirage. This mirage I have referred to in previous articles is the “False Ascension Matrix” Program. This is why the 4th (Astral Plane) and the 7th dimensions (violet flame and Planetary Logos/group mind) are so important in how they intersect and feed the levels of false (enslavement) programming.[5]

Beloveds-Bring in the Universal Harmonics in an Oscillating Wave Format to recode all bi wave systems into the trinity wave formats to create the Krystal Star communication stations, here and now. I/we request the Removal of All Crucifixion patterns and their implants to be removed from _______________ in all areas in the sequence necessary to support the optimization and Ascension of this beloved land and within all beings we have permission to represent in this time and space. Terminate and resolve all inorganic and alien influences, terminate all enslavement records from impacting this land with intent to harm or hurt.[6]