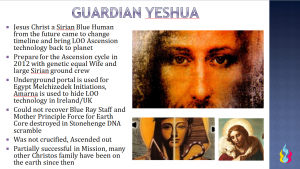 As the result of the recent escalation of AI Timeline Wars, the Guardian Christos Mission has reached the stage of dismantling sections of the actual phantom matrix infrastructure, the actual artificial intelligence architecture put into place through the insertion of the Artificial Tree of Life. The phantom matrix uses four main black pillars in reversal architecture to power up their artificial creations, based upon holographic inserts made of the four main Grual Point Christos Mission Guardians and their respective timelines. We have generated a graphic aid to help assist in the visualization of the concept of artificial timelines projecting from the Phantom Matrix, which describes the AI Timeline Wars. Please take note that this is not intended to be a literal representation; it is a visualization intended to help the mind grasp the blended reality system of organic timelines and artificial timelines that we experience at this time on the earth. This helps to understand the reality of Cloned Ascended Masters used by imposter Black Sun entities to manipulate Awakening humanity. [7]

In retaliation the NAA concocted one of the largest lies promoted to divide the human race by promoting the false archetypal story of a Crucified Christ figure as a mockery to further enslave humans into worshipping their own crucifixion. The crucifixion represents the torture and suffering of human beings, as our species holds the blueprint of the Inner Christ. Thus, we have been crucified and implanted with this alien mind control and false holograms when our planet was invaded. These artificial structures are called Crucifixion implants. Yeshua and his wife Mary are the most heavily cloned images implanted as holographic inserts in the earth’s artificial timelines for the purpose of maintaining the NAA’s religious control mechanisms, and 5D gate access from Vatican City that includes their related control centers.[8]