A hormone (from the Greek participle ὁρμῶν, "setting in motion") is any member of a class of signaling molecules, produced by glands in multicellular organisms, that are transported by the circulatory system to target distant organs to regulate physiology and behavior. Hormones have diverse chemical structures, mainly of three classes:

The glands that secrete hormones comprise the endocrine signaling system. The term "hormone" is sometimes extended to include chemicals produced by cells that affect the same cell (autocrine or intracrine signaling) or nearby cells (paracrine signalling).

Hormones affect distant cells by binding to specific receptor proteins in the target cell, resulting in a change in cell function. When a hormone binds to the receptor, it results in the activation of a signal transduction pathway that typically activates gene transcription, resulting in increased expression of target proteins; non-genomic effects are more rapid, and can be synergistic with genomic effects. Amino acid–based hormones (amines and peptide or protein hormones) are water-soluble and act on the surface of target cells via second messengers; steroid hormones, being lipid-soluble, move through the plasma membranes of target cells (both cytoplasmic and nuclear) to act within their nuclei.

Hormone secretion may occur in many tissues. Endocrine glands provide the cardinal example, but specialized cells in various other organs also secrete hormones. Hormone secretion occurs in response to specific biochemical signals from a wide range of regulatory systems. For instance, serum calcium concentration affects parathyroid hormone synthesis; blood sugar (serum glucose concentration) affects insulin synthesis; and because the outputs of the stomach and exocrine pancreas (the amounts of gastric juice and pancreatic juice) become the input of the small intestine, the small intestine secretes hormones to stimulate or inhibit the stomach and pancreas based on how busy it is. Regulation of hormone synthesis of gonadal hormones, adrenocortical hormones, and thyroid hormones often depends on complex sets of direct-influence and feedback interactions involving the hypothalamic-pituitary-adrenal (HPA), -gonadal (HPG), and -thyroid (HPT) axes.[1] 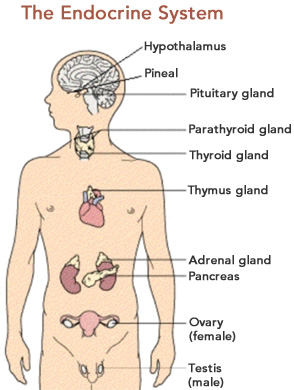 The endocrine system refers to the collection of glands of an organism that secrete Hormones directly into the circulatory system to be carried towards a distant target organ. The major endocrine glands include the Pineal Gland, Pituitary Gland, Thymus Gland, pancreas, ovaries, testes, thyroid gland, parathyroid gland, hypothalamus, gastrointestinal tract and adrenal glands. [2]

Transcript - The Egyptians knew that our Endocrine System was responsible for secreting hormones and those Hormones were responsible for our neurology being able to perceive other dimensions. The hormonal secretions change our neurochemistry and then align us to the broadcast to those particular windows of the Soul. [3]

The Endocrine glands are responsible for producing, distributing and helping the body to assimilate hormones. Hormones act as chemical messengers in the bloodstream that communicate to organs and body parts, which maintain the body's functioning in a state of balanced health or homeostasis. Hormones are the chemical messengers that are required to transmit to the Brain and nervous system that which allows higher perception of multidimensional realities, translate Universal Languages, and activate ranges of higher sensory abilities. We should have the true spiritual understanding and realize that our glands and hormones are directly related to expressions of Consciousness, and their function is intrinsic to our ability to achieve higher consciousness.ref>Genetic Mutations January 2016</ref>

Krystal Waters also known in the eastern philosophy as Amrita is a fluid that can flow from the Pineal Gland and Pituitary Gland correct relationship in the brain and move down the Throat in deep states of activated Kundalini or Meditation. "In Tibetan Buddhism, this is the source of the "White Drop" that descends to the heart center, where it mixes with the ascending "Red Drop" attain an enlightened body and mind. All this activity is seen as a cosmic sex act in the head. The phallic-shaped pineal gland releases a pure white liquid light that impregnates the nearby bi-lobed pituitary gland, which then releases Hormones in the blood that inaugurate a Second (Spiritual) Puberty in the body."[4]

This nuclear core sends intelligent consciousness energy from all combined blueprint layers into the central nervous system, which sets the metabolic and biological base rhythms. These Biological Base Rhythms are imprinted from the Soul and spiritual intelligence into the Blood, which form into the historical spiritual records. This blood record forms an imprint that is recorded in the brain to produce and distribute Hormones, and the natural chemical reactions that are recorded in each organ and gland, and into all cellular tissues.[5]

Physiologically, the function of the Brain is to exert centralized control over the other organs of the body. The brain acts on the rest of the body both by generating patterns of muscle activity and by driving the secretion of chemicals called Hormones.[6]