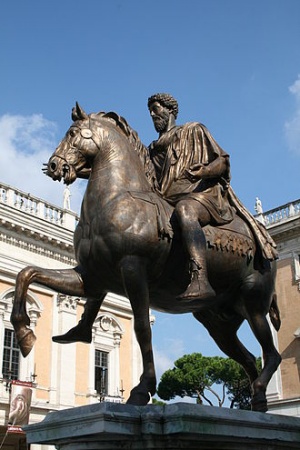 Marcus Aurelius (Marcus Aurelius Antoninus Augustus);(26 April 121 – 17 March 180 AD) was Roman Emperor from 161 to 180. He ruled with Lucius Verus as co-emperor from 161 until Verus' death in 169. He was the last of the Five Good Emperors, and is also considered one of the most important Stoic philosophers. During his reign, the Empire defeated a revitalized Parthian Empire in the East; Aurelius' general Avidius Cassius sacked the capital Ctesiphon in 164. In central Europe, Aurelius fought the Marcomanni, Quadi, and Sarmatians with success during the Marcomannic Wars, with the threat of the Germanic tribes beginning to represent a troubling reality for the Empire. A revolt in the East led by Avidius Cassius failed to gain momentum and was suppressed immediately. Marcus Aurelius' Stoic tome Meditations, written in Greek while on campaign between 170 and 180, is still revered as a literary monument to a philosophy of service and duty, describing how to find and preserve equanimity in the midst of conflict by following nature as a source of guidance and inspiration.[1]

Hierophant is a person who brings religious congregants into the presence of that which is deemed holy. The word comes from Ancient Greece, where it was constructed from the combination of ta hiera, "the holy," and phainein, "to show." In Attica it was the title of the chief priest at the Eleusinian Mysteries. Secret religious rites (Spiritual Initiation or Mystery Schools) of ancient Greece. It is thought that their basis was an old agrarian cult which probably goes back to the Mycenean period (c. 1600 – 1100 BC) The rites, ceremonies, and beliefs were kept secret and consistently preserved from antiquity. The initiated believed that they would have a reward in the afterlife. In 170 AD, the Temple of Demeter (Sophia) was sacked by the Sarmatians (Eastern Iranian People) but was rebuilt by Marcus Aurelius. Aurelius was then allowed to become the only lay person ever to enter the anaktoron (Holy of Holies, Inner Sanctum). As Christianity gained in popularity in the 4th and 5th centuries, Eleusis's (Mystery School) prestige began to fade.