Difference between revisions of "Messier 51" 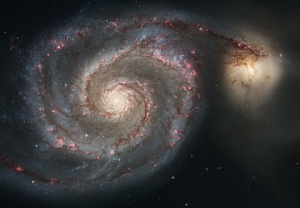 The Whirlpool Galaxy (also known as Messier 51a, M51a, or NGC 5194) is an interacting grand-design spiral galaxy with a Seyfert 2 active galactic nucleus in the constellation Canes Venatici. It was the first galaxy to be classified as a spiral galaxy. Recently it was estimated to be 23 ± 4 million light-years from the Milky Way, but different methods yield distances between 15 and 35 million ly. Messier 51 is one of the best known galaxies in the sky. The galaxy and its companion (NGC 5195) are easily observed by amateur astronomers, and the two galaxies may even be seen with binoculars. The Whirlpool Galaxy is also a popular target for professional astronomers, who study it to further understand galaxy structure (particularly structure associated with the spiral arms) and galaxy interactions. What later became known as the Whirlpool Galaxy was discovered on October 13, 1773 by Charles Messier while hunting for objects that could confuse comet hunters, and was designated in Messier's catalogue as M51.Its companion galaxy, NGC 5195, was discovered in 1781 by Pierre Méchain, although it was not known whether it was interacting or merely another galaxy passing at a distance. Located within the constellation Canes Venatici, M51 is found by following the easternmost star of the Big Dipper, Eta Ursae Majoris, and going 3.5° southwest. Its declination is +47°, making it a circumpolar for observers located above 43°N latitude; it reaches high altitudes throughout the northern hemisphere making it an accessible object from the early hours in winter through the end of spring season, after which observation is hindered in lower latitudes.

A black hole, surrounded by a ring of dust, is thought to exist at the heart of the spiral. The dust ring stands almost perpendicular to the relatively flat spiral nebula. Stars are usually formed in the center of the galaxy. The center part of M51 appears to be undergoing a period of enhanced star formation. The present efficiency of star formation, defined as the ratio of mass of new stars to the mass of star-forming gas, is only ~1%, quite comparable to the global value for the Milky Way and other galaxies. It is estimated that the current high rate of star formation can last no more than another 100 million years or so.

Induced spiral structure in the larger galaxy is not the only effect of the interaction. Significant compression of hydrogen gas occurs that leads to the development of starbirth regions. In pictures of M51 these show up as the bright blue 'knots' throughout the spiral arms.A secondary ring crosses the primary ring on a different axis, a phenomenon that is contrary to expectations. A pair of ionization cones extend from the axis of the main dust ring.

The Whirlpool Galaxy is the brightest galaxy in the M51 Group, a small group of galaxies that also includes M63 (the Sunflower Galaxy), NGC 5023, and NGC 5229. This small group may actually be a subclump at the southeast end of a large, elongated group that includes the M101 Group and the NGC 5866 Group, although most group identification methods and catalogs identify the three groups as separate entities.[1]