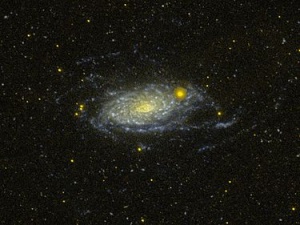 Messier 63 (also known as M63, NGC 5055, or the Sunflower Galaxy) is a spiral galaxy in the constellation Canes Venatici consisting of a central disc surrounded by many short spiral arm segments. Messier 63 is part of the Messier 51 Group, a group of galaxies that also includes M51 (the 'Whirlpool Galaxy').

M63 was discovered by Pierre Méchain on June 14, 1779. The galaxy was then listed by Charles Messier as object 63 in the Messier Catalogue. In the mid-19th century, Lord Rosse identified spiral structures within the galaxy, making this one of the first galaxies in which such structure was identified.[3]