Difference between revisions of "Messier 94" 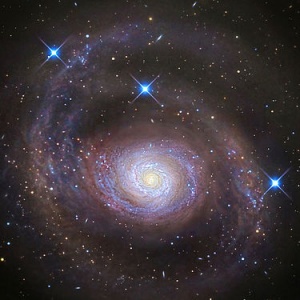 Messier 94 (also known as NGC 4736) is a spiral galaxy in the constellation Canes Venatici. It was discovered by Pierre Méchain in 1781,and catalogued by Charles Messier two days later. Although some references describe M94 as abarred spiral galaxy, the "bar" structure appears to be more oval-shaped.The galaxy is also notable in that it has two ring structures.

M94 contains both an inner ring with a diameter of 70" and an outer ring with a diameter of 600". These rings appear to form at resonance locations within the disk of the galaxy. The inner ring is the site of strong star formation activity and is sometimes referred to as a starburst ring. This star formation is fueled by gas that is dynamically driven into the ring by the inner oval-shaped bar-like structure. A 2009 study conducted by an international team of astrophysicists revealed that the outer ring of M94 is not a closed stellar ring, as historically attributed in the literature, but a complex structure of spiral arms when viewed in mid-IR and UV. The study found that the outer disk of this galaxy is active. It contains approximately 23% of the galaxy's total stellar mass and contributes about 10% of the galaxy's new stars. In fact, the star formation rate of the outer disk is approximately two times greater than the inner disk because it is more efficient per unit of stellar mass.[1]

In 2008 a study was published that appeared to show that M94 had very little or no dark matter present. The study analyzed the rotation curves of the galaxy's stars and the density of hydrogen gas and found that ordinary luminous matter appeared to account for all of the galaxy's mass. This result was unusual and somewhat controversial, as current models don't indicate how a galaxy could form without a dark matter halo or how a galaxy could lose its dark matter.[2]