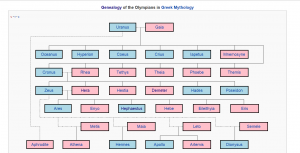 In the ancient Greek religion, the Twelve Olympians are the major deities of the Greek pantheon, commonly considered to be Zeus, Hera, Poseidon, Demeter, Athena,Apollo, Artemis, Ares, Aphrodite, Hephaestus, Hermes and either Hestia, or Dionysus. Hades and Persephone were sometimes included as part of the twelve Olympians (primarily due to the influence of the Eleusinian Mysteries), although in general Hades was excluded, because he resided permanently in the underworld and never visited Olympus.[1]

When the Electric Wars happened to the Hyperboreans, they were split apart from their higher counterparts in Polaris. So when you think of Polarians and Hyperboreans, these are part of the 1st Root Races that were ever seeded as a part of spirit coming into a type of body and having a consciousness. Having some kind of experience on a planet in a body. Hyperborean in the beginning stages, was again, a golden age but by the end, the electric wars happened. Again, this is a part of the the Orion Group and the conflict over dominion over planets such as the Earth. Who's going to seed here? Who's going to live here? Why are you here and I'm not? This is what happened and because of this massive tragedy of war, the Hyperboreans split and fragmented. Some of them were incarnated on our planet and those mythologies, what we call a mythology of the Hyperborean, are actually the Titans we know in Greek mythology. So, when we are talking about Perseus, Zeus and the Olympians, were talking about the original races that sourced form the Hyperboreans. The Hyperboreans are related to all of that Greek tragedy. When you understand a Greek tragedy, my God, is it a tragedy. Everything about that mythology is just terrible, it's tragic.The Hyperboreans is a part of what became known on our planet, so I would say there's a genetic relationship to that and there is also a landmass relationship to that. Think of our planet, in this density, merging with its higher body. Think of our own bodies. We have a soul body and we have a monad body, same thing with planet Earth. Planet Earth’s soul body is Tara. Planet Earth's Monad body is Gaia. On the Gaian body, the monad body of planet Earth, the Hyperboreans existed as a consciousness and that access point is in the northern part of our planet. So, when you think about how large these bodies are, remember the monad body is like 16 to 20 feet high. When you think of Titans and Olympians you get my meaning. The monad body is a lot bigger than the body we inhabit on planet today. The Hyperboreans, at that time, being in a type of pre-prototype monad body, their bodies were huge. They were big beings. Those are the Titans. I am sure a lot of the Nordic mythologies came out of that. Think of Thor, and maybe more into Swedish, Norwegian and Celt histories, there are probably a lot of overlays coming from the Hyperboreans. When you think of the Titans and Olympians there are a lot of similarities. Again, when we understand that this is a part of the 7D Earth and a part of the monad body, remember that the 7D Earth was invaded. So, this electric war is related to understanding how the planetary mind was invaded. What is happening on 7D Earth has a repercussion to the earth we are on. When you understand that this is all happening simultaneously, through various timelines and creation that are reflecting an aspect of Consciousness of that entire planetary body.[2]