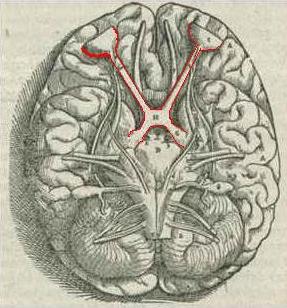 The Optic Chiasm is located at the bottom of the brain immediately below the hypothalamus.One of the most important functions of the hypothalamus is to link the nervous system to the endocrine system via the Pituitary Gland. The Optic Chiasm allows the images from either side of the field from both eyes to be transmitted to the appropriate side of the brain, combining the sides together. This allows for parts of both eyes that attend to the right visual field to be processed in the left visual system in the brain, and vice versa. This is linked to skin sensation.[1]

Transcendental vision occurs due to increased kundalini flow raising dopamine and phenylethylamine and other brain neurotransmitters. All kind of changes happen in the retinas, optic nerve, Optic Chiasm and occipital lobes, including increased ATP production acting as a neurotransmitter and histamine increasing blood flow in the brain, and increase in nitric oxide metabolism. The end result being that one has an increase in visual acuity, inner visions, inner lights, seeing auras and vivid dreams. [2]