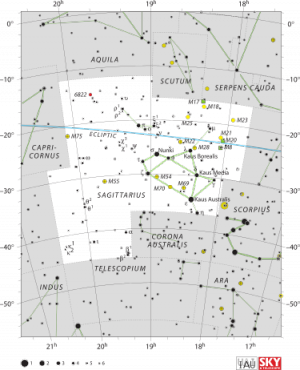 As seen from the northern hemisphere, the constellation's brighter stars form an easily recognizable asterism known as 'the Teapot'. The stars δ Sgr (Kaus Media), ε Sgr (Kaus Australis), ζ Sgr (Ascella), and φ Sgr (Nanto) form the body of the pot; λ Sgr (Kaus Borealis) is the point of the lid; γ2 Sgr (Alnasl) is the tip of the spout; and σ Sgr(Nunki) and τ Sgr (the closest bright star to the possible origin of the Wow! signal) the handle.

The Babylonians identified Sagittarius as the god Nergal, a strange centaur-like creature firing an arrow from a bow. It is generally depicted with wings, with two heads, one panther head and one human head, as well as a scorpion's stinger raised above its more conventional horse's tail. The Sumerian name Pabilsag is composed of two elements – Pabil, meaning 'elder paternal kinsman' and Sag, meaning 'chief, head'. The name may thus be translated as the 'Forefather' or 'Chief Ancestor'.[23] The figure is reminiscent of modern depictions of Sagittarius.

In Greek mythology, Sagittarius is usually identified as a centaur: half human, half horse. However, perhaps due to the Greek's adoption of the Sumerian constellation, some confusion surrounds the identity of the archer. Some identify Sagittarius as the centaur Chiron, the son of Philyra and Saturn and tutor to Jason, who was said to have changed himself into a horse to escape his jealous wife, Rhea. However, Chiron is in fact represented by the constellation Centaurus, the other heavenly centaur. An alternative tradition is that Chiron merely invented the constellation Sagittarius to help in guiding the Argonauts in their quest for the Golden Fleece.

A competing mythological tradition, as espoused by Eratosthenes, identified the Archer not as a centaur but as the satyr Crotus, son of Pan, who Greeks credited with the invention of archery.According to myth, Crotus often went hunting on horseback and lived among the Muses, who requested that Zeus place him in the sky, where he is seen demonstrating archery. 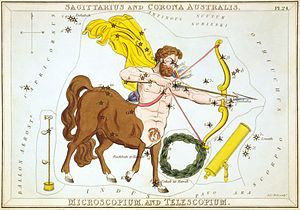 The arrow of this constellation points towards the star Antares, the "heart of the scorpion," and Sagittarius stands poised to attack should Scorpius ever attack the nearby Hercules, or to avenge Scorpius's slaying of Orion.[2]

This is the stage of the ascension process which is the incineration of the old form and burning up of the old and decrepit energies, through stages of healing crisis. This is similar to the spiritual bonfire of the lower self and parasites. Once the higher divine blueprint and Cosmic Aether have been connected to the body, massive healing begins. This is reducing the old negative form and its debris into ashes; as the Phoenix that rises from its ashes, is reborn upon its old form which was incinerated in the bonfire. This is a stage of the spiritual alchemy which has phase transition which change the matter substance from blackened, to gray and then to white. Sometimes one can sense the death energy in the blackened state. This begins stages of great renewal and resurrection in the ascending consciousness.[3]