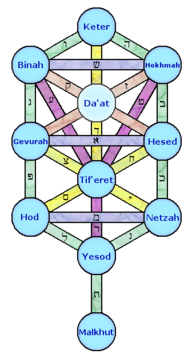 The Sephiroth meaning emanations, are the 10 attributes of God as described in the Kabbalah, part of the esoteric teaching of Judaism. Judaism's Kabbalah is based on the teachings given by the Yahweh Collective located on Saturn. The Kabbalah brought through pieces of Melchizedek intelligence through the knowledge of the Universal Tree of Life. Due to patriarchal distortions brought through the hidden Negative Alien invasion, the tree of life was disfigured to ten spheres instead of the original mathematical base of twelve. The Kabbalah tree of life represents the distorted 10D base code genetic blueprint of the black sun regressive lineages. Melchizedeks returning to the earth field at the end of the cycle, are attempting to correct and rebuild the distorted Tree of Life back to its correct formula base 12. The 12 Tree Grid is the base holographic instruction set to all manifestation.

The Melchizedeks are of the 12 Tribes lineages of the Hibiru Tribes, who were given the genetic hosting responsibility to assist in the embodiment of the higher DNA language called Habiru. This language is a genetic code which originated from the Cradle of Lyra, in the Avatar matrix timelines. The Melchizedek lines were attempting to salvage this ancient language of humanity on the earth, which was intrinsic to protecting the memories of the histories of humanity in time codes, also known as Vector Codes.

Upon the Luciferian Rebellion the Melchizedek lines became infiltrated by the Luciferian forces. The primary infiltration was from Patriarchal Melchizedeks who developed a misogynist bent based on the distortions in the Sophianic Body. These lines started to lose their connection to the Mother principle from the many wars they justified in their beliefs that led them to commit intentional harm to others. This is the Fallen Melchizedek's, once a Universal unity consciousness, a faction of this Melchizedek consciousness succumbed to the illusion of inequality between the gender principle. This led to a hive mind mentality, which is a group consciousness out of balance with unity. This patriarchal slant distorted the original 12 Base code (12D Ray) into 10 base code. This became the primary root of all control over the patriarchy, the masculine principle, the damage to rod function, the reversal 10:10 code was born and brought to earth from this distortion. This greatly impacted the 10th gate known as the Iran Gate and the Family of Michael which are a lineage of the Blue Ray Melchizedeks.[1][2]

Ezekiel cannot go anywhere until this field is cleaned up in relationship to collective masculine consciousness, especially that which is connected to the Hibiru Tribes. Recently, it has been magnified that the bones and graves of prominent people like Ezekiel had been robbed by the NAA. They use the Morphogenetic Fields of certain key figures that they have picked for Religious heroes or other roles that further the Yahweh-Jehovian False Father God Religions on the earth. This is very important in the timeline of body elemental corruption. The Sextant Matrix is equal to degrading the elementals and to the corruption coded into the Mitochondria and DNA as Miasma's.[3] 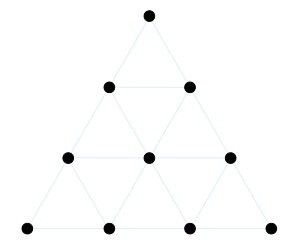 As a mystical symbol, this was very important to the secret worship of the Pythagoreans which became the basis of many mystical teachings. Kabbalah, Freemasonry and Rosicrucianism have claimed to have evolved out of the Pythagorean Brotherhood. Ten is the all-inclusive structure of the four dimensional Universe, which also represents maintaining the domination and order contained within the structure. Thus, ten also represents the “Matrix” of that construct which hypnotizes and keeps one locked in the illusion of the third dimensional world.This ninth stage of the Galactic Zodiac Law, Ophiuchus, is transmitted to the planet in the combination of divine aether and water, or fiery waters, which carry the archetype of the sacred wound healer of humanities spiritual ascension.These nine divisions of the Magnum Opus of Alchemical Law meet in Ophiuchus and are three (3) times three (3), plus the Universal Prima Materia (Azoth) life force which equal ten (10), the sacred decad of Pythagoras. The Hebrew Tetragrammaton (YHWH-4) and Sephiroth in the Tree of Life are based on The Sacred Decad or Tetractys. This is a triangular figure consisting of ten points arranged in four rows.[4]

The Qlippoth is the Negative Form shell and/ or Imposter Spirit negative force of the Sephiroth, sends off the work to the rest of the Qlippoth, gives energy to the Qlippoth, the source of power and its force as in its Miasma, which acts as a generator of the same force. Simply, these are the Dead Light forces of the Shadow Self and their spiritual-energetic qualities.