Difference between revisions of "Soul Matrix" 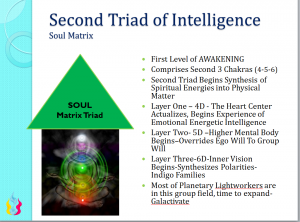 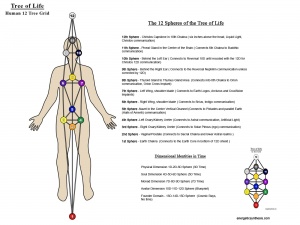 The Spirit body of the Monad is only consciously aware of the contents of the Soul when it is connected to the Soul. This is the same as when the physical body is disconnected from the Soul, the conscious mind does not remember her (cannot feel the soul). When the Spirit body is disconnected from the Soul, the spirit consciousness can no longer remember the Soul, and becomes unconscious of the Souls memory of existence. This unconsciousness has the impact of Soul Fragmentation. How this manifests in the First World, the lowest plane on earth, is Insanity, schizophrenia, catatonia, psychotic break, and all other forms of split consciousness. How this manifests in the Second world is chaotic dream states of astral delusions, holographic bits of fragmented pictures of millions of storylines. These pictures intersect without coherence or cohesion, just jumbled messages of dreamy, disconnected fantasy images and impressions. This manifests in the Third World in much the same way as an anesthetic puts the consciousness to sleep, similar to hypnotic like trance or sleepwalking. When the Consciousness layers are split apart, it results in a sleepwalking or amnesiac type trance in all Three Worlds. Conversely, when we awaken our consciousness and start to desire communication with our Soul and Spirit, this starts the awakening process in all Three Worlds. [3]

When aspects of the Soul fragment and sink into the lowest layers of perception, they enter a danger zone. Some of these distorted aspects are from our fallen history and the astral body damage that ensued with the 2D/4D Split. The 2D-schism split the instinctual body into separate functions, creating a collection of fragmented astral sub-personalities and a repository for collective chaotic forces. The 4D-schism placed a barrier that separates the astral body/heart chakra from merging with the 3D Solar Plexus mental body. This created a Soul Split that subjects the person to underworld energies and lower astral traveling.When the Soul is separated from its higher spirit body and continually sinks into the lowest dimension, it will merge at the areas where the personal and collective unconsciousness start to flow together. When this merge with collective unconscious occurs, dark, chaotic, shadow bodies start to emerge and multiply. The Soul aspect enters the realm of the Underworlds, which are the spheres of collective unconsciousness. This is the chaotic realm of demonic hierarchies, animalistic, vulgar and grotesque creations. If this soul-spirit consciousness split remains at the death of the body, the human being enters this Underworld of darkness and demonism. [4]

When aspects of the Soul fragment and sink into the lowest layers of perception, they enter a danger zone. When the Soul is separated from its higher Spirit body it continually sinks into the lowest dimensions, where the personal shadow and collective unconsciousness start to flow together and merge. When this merge with collective unconscious occurs, dark, chaotic, shadow bodies start to emerge and multiply, possibly becoming fixed and consubstantial with the Soul, engulfing its light. The Soul aspect enters the realm of the underworlds or phantom matrix, which are the spheres of collective unconsciousness in which the NAA and lunar groups are directing artificial technology to create consciousness traps. Primarily, the consciousness traps are the AI False Timeline Propagation that was generated from the NAA group’s 9-11-2001 declared war against humanity, called the Armageddon Software. This event signified that they intended to take complete control over the future earth timelines, and would attempt to circumvent Ascension by continued dimensional blending experiments and instigating wars, while rolling out the Transhumanist agenda.[5]