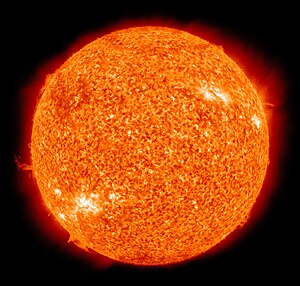 False-color image taken in 2010 as seen in ultraviolet light (wavelength of 30.4 nm)

Planet earths local Sun is a star called Sol. Our Sun is a Stargate and it is possible for certain craft to be used to go in and out of the Solar System. The 4th dimensional Stargate on the earth is located in Giza, Egypt and this is the opening into the Astral Plane where the trajectory between the Sun and Earth is interconnected through geometric fields of instruction sets based on the grouping of Platonic Solids, which are building blocks of matter or Blueprint of the Universe. The Annunaki had taken control of this area of the planet, in order to gain control over our Sun, as the Sun is related to activating human DNA, as well as to control access of the Sun portal. Each Sun and Star in the Universe are interconnected through the Morphogenetic Fields, or plasma filaments that create the webbing that connects all of the stars Consciousness together.

Our Sun is a Stargate and it is possible for certain craft to be used to go in and out of the Solar System from the Solar portal, making our Solar System an important outpost that has generated territorial conflict between intruding races. The original 4th dimensional Stargate on the earth is located in Giza, Egypt and this is a main opening access into other portals, as well as access into the many layers of the Astral Plane. In this location, the trajectory path made between the Sun and Earth can be accessed, it is interconnected through geometric fields of mathematical instruction sets based on the base groupings of Platonic Solids, which are the building blocks of matter or geometric coding that arranges the Blueprint of the Universe. Thousands of years ago, the Annunaki had taken control of this area of the planet, in order to gain control over the important relationship that exists between the earth and the Sun, as well as attempting to take control over its plasma transmissions as an energy source. Thus, the Sun’s activity is important to many as it is related to activating higher DNA on the earth, as well as acting as the control access point of who goes in and out through the Sun portal. Each Sun and Star in the Universe is interconnected through the intricate blueprints recorded in the Morphogenetic Field layers, and the Plasma filaments that create the etheric webbing that connects all of the star consciousness together.

During the Ascension Cycle the planet is exposed to many sequences of broadcasts from Solar Flares and Stellar Activations which cause the levels of the planetary field to progressively open up into each other, dissolving the dimensional frequency barriers that kept the levels separate at one time within the planetary field. The levels continue to dissolve as these energetic fields on the earth progressively draw in more frequency patterns from the higher dimensional fields or the unified fields. As these levels dissolve, progressively more consciousness energy and awareness merge with and become held within, the biological life form, and the biological life form shifts from one set of dimensional time continuum cycles to another.[1]

The Solar System is undergoing a momentous shift whereby the eleven main celestial bodies or planets are being magnetically synchronized with the shifting magnetic core in our Sun-Star. Our Sun is the eighth Sun Star from the Pleiades or Seven Sisters star cluster located in the Taurus Constellation. Our Sun passes through the Taurus constellation from mid-May to mid-June in which oceanic plasma waves are currently being transmitted and are reconnecting our Sun’s magnetic core to properly realign with the stars of her Seven Sisters. The reunification of our Sun with her Seven Sister Stars in the Taurus constellation, effectively purges out a tremendous amount of collective human race miasmatic record and nullifies the effects of the trauma timelines that happened as the result of the Fall of Tara.

As the vast amounts of solar plasma streams entering the magnetosphere run directly into the planetary Crystal Core and into the inner domains, this sets a new magnetic wave resonance pattern in the planetary grid. This organic magnetic wave pattern appears to have extremely amplified effects for activating the Crystal Body with new DNA tones within physical matter. There is an ascension wave of accelerated Crystal Body activation taking place in the collective race consciousness to attune the human lightbody into spiritual alignment with the solar codes of the Seven Sisters DNA musical tones. This is to help support the human race and spiritual families to be increasingly stabilized while experiencing the magnitude of shifts happening in the planetary Ascension timeline, which includes the global revelation of the future Disclosure events.[2]