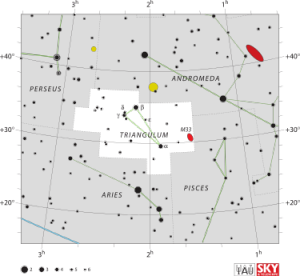 Triangulum is a small constellation in the northern sky. Its name is Latin for "triangle", derived from its three brightest stars, which form a long and narrow triangle. Known to the ancient Babylonians and Greeks, Triangulum was one of the 48 constellations listed by the 2nd century astronomer Ptolemy. The celestial cartographers Johann Bayer and John Flamsteed catalogued the constellation's stars, giving six of them Bayer designations.The white stars Beta and Gamma Trianguli, of apparent magnitudes 3.00 and 4.00, respectively, form the base of the triangle and the yellow-white Alpha Trianguli, of magnitude 3.41, the apex. Iota Trianguli is a notable double star system, and there are three star systems with planets located in Triangulum. The constellation contains several galaxies, the brightest and nearest of which is the Triangulum Galaxy or Messier 33 —a member of the Local Group. The first quasar ever observed, 3C 48, also lies within Triangulum's boundaries.[1]

In the Babylonian star catalogues, Triangulum, together with Gamma Andromedae, formed the constellation known as MULAPIN "The Plough". It is notable as the first constellation presented on (and giving its name to) a pair of tablets containing canonical star lists that were compiled around 1000 BC, the MUL.APIN. The Plough was the first constellation of the "Way of Enlil"—that is, the northernmost quarter of the Sun's path, which corresponds to the 45 days on either side of summer solstice. Its first appearance in the pre-dawn sky (Heliacal rising) in February marked the time to begin Spring ploughing in Mesopotamia. The Ancient Greeks called Triangulum Deltoton (Δελτωτόν), as the constellation resembled an upper-case Greek letter delta (Δ). It was transliterated by Roman writers, then later Latinised as Deltotum. Eratosthenes linked it with the Nile Delta, while the Roman writer Hyginus associated it with the triangular island of Sicily, formerly known as Trinacria due to its shape.It was also called Sicilia, because the Romans believed Ceres, patron goddess of Sicily, begged Jupiter to place the island in the heavens. Greek astronomers such as Hipparchos and Ptolemy called it Trigonon (Τρίγωνον), and later, it was Romanized as Trigonum. Other names referring to its shape include Tricuspis and Triquetrum. Alpha and Beta Trianguli were called Al Mīzān, which is Arabic for "The Scale Beam".In Chinese astronomy, Gamma Andromedae and neighbouring stars including Beta, Gamma and Delta Trianguli were called Teen Ta Tseang Keun (天大将军, "Heaven's great general"), representing honour in astrology and a great general in mythology.[2]

The Northern Triangle, Triangulum, has feminine associations, it represents the island of Sicily and was put in the sky at the behest of Demeter (Roman Ceres), or was a wedding present to her daughter Persephone. The three goddesses Persephone, Demeter and Hecate (also called Hecate Triformis 'three forms', and Hecate Trivia 'three ways') are seen as a type of trinity. The northern triangle was also given the title 'the Mitre of Saint Peter'. The word mitre or miter (from the IE root *mei-4 'To tie'), is a triangular hat, and related to the word mitochondrion, the Mitochondria DNA is inherited and transmitted exclusively by our mothers.[3]