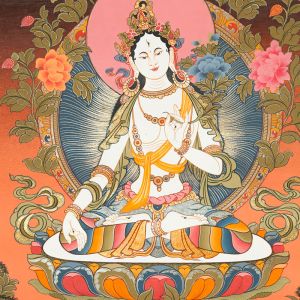 White Tara, known as Sita Tara in Sanskrit, is worshipped as the mother of all Buddhas and an embodiment of the maternal aspect of compassion. Her white color is a symbol of purity, the immaculate truth of the Dharma and perfectly pure wisdom. She is also associated with long life, the healing of physical and mental illnesses, and the elimination of difficulties that appear on the road to the ultimate goal of enlightenment. Her power is related to the prevention of accidents, natural disasters, lack of physical vitality, and anything that could endanger life.

The white form of Tara is very popular in Tibet, where she is known as Drolma Karmo or Drolkar. In the pantheon of Tibetan Buddhism, she serves as the main deity of longevity together with Amitayus and Ushnishavijaya. Tibetans worships Tara as one of the most important deities along with Avalokiteshvara, the bodhisattva of compassion. They recognize her enlightened nature reincarnated in women with extraordinary qualities. This tradition is spread through the regions of Tibetan Buddhism, including Mongolia.[1]