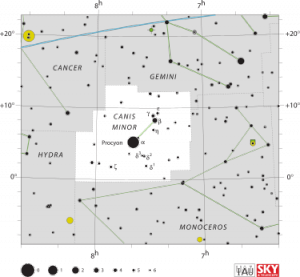 Canis Minor is a small constellation in the northern celestial hemisphere. In the second century, it was included as an asterism, or pattern, of two stars in Ptolemy's 48 constellations, and it is counted among the 88 modern constellations. Its name is Latin for "lesser dog", in contrast to Canis Major, the "greater dog"; both figures are commonly represented as following the constellation of Orion the hunter. Canis Minor contains only two stars brighter than the fourth magnitude, Procyon (Alpha Canis Minoris), with a magnitude of 0.34, and Gomeisa (Beta Canis Minoris), with a magnitude of 2.9. The constellation's dimmer stars were noted by Johann Bayer, who named eight stars including Alpha and Beta, and John Flamsteed, who numbered fourteen. Procyon is the seventh-brightest star in the night sky, as well as one of the closest. A yellow-white main sequence star, it has a white dwarf companion. Gomeisa is a blue-white main sequence star. Luyten's Star is a ninth-magnitude red dwarf and the Solar System's next closest stellar neighbour in the constellation after Procyon. The fourth-magnitude HD 66141, which has evolved into an orange giant towards the end of its life cycle, was discovered to have a planet in 2012. There are two faint deep sky objects within the constellation's borders. The 11 Canis-Minorids are a meteor shower that can be seen in early December.

Lying directly south of Gemini's bright stars Castor and Pollux, Canis Minor is a small constellation bordered by Monoceros to the south, Gemini to the north, Cancerto the northeast, and Hydra to the east. It does not border Canis Major; Monoceros is in between the two. Covering 183 square degrees, Canis Minor ranks seventy-first of the 88 constellations in size. It appears prominently in the southern sky during the Northern Hemisphere's winter.[1]

Though strongly associated with the Classical Greek uranographic tradition, Canis Minor originates from ancient Mesopotamia. Procyon and Gomeisa were calledMASH.TAB.BA or "twins" in the Three Stars Each tablets, dating to around 1100 BC. In the later MUL.APIN, this name was also applied to the pairs of Pi3 and Pi4Orionis and Zeta and Xi Orionis. The meaning of MASH.TAB.BA evolved as well, becoming the twin deities Lulal and Latarak, who are on the opposite side of the sky from Papsukal, the True Shepherd of Heaven in Babylonian mythology. Canis Minor was also given the name DAR.LUGAL, which translates to "the star which stands behind it", in the MUL.APIN; the constellation represents a rooster. This name may have also referred to the constellation Lepus.[ DAR.LUGAL was also denoted DAR.MUŠEN and DAR.LUGAL.MUŠEN in Babylonia. Canis Minor was then called tarlugallu in Akkadian astronomy.[2]

The medieval Arabic astronomers maintained the depiction of Canis Minor (al-Kalb al-Asghar in Arabic) as a dog; in his Book of the Fixed Stars, Abd al-Rahman al-Sufiincluded a diagram of the constellation with a canine figure superimposed.There was one slight difference between the Ptolemaic vision of Canis Minor and the Arabic; al-Sufi claims Mirzam, now assigned to Orion, as part of both Canis Minor—the collar of the dog—and its modern home. The Arabic names for both Procyon and Gomeisa alluded to their proximity and resemblance to Sirius, though they were not direct translations of the Greek; Procyon was called ash-Shi'ra ash-Shamiya, the "Syrian Sirius" and Gomeisa was called ash-Shira al-Ghamisa, the Sirius with bleary eyes.[10] Among the Merazig of Tunisia, shepherds note six constellations that mark the passage of the dry, hot season. One of them, called Merzem, includes the stars of Canis Minor and Canis Major and is the herald of two weeks of hot weather.

The ancient Egyptians thought of this constellation as Anubis, the jackal god.[3]