The Imposters attempt to increase the bondage loops of the Spirits of Fear in the minds of people who are building demonic houses, within their consciousness from their own mind and fear based thoughtforms. When the body, mind and heart are corrupted by repeated fear based thoughts, the internal structure to house these energies, these qualities of demonic spirits, will reside in the mind and consciousness body. These lower quality spirits manifest tremendous pain and suffering, and are also called Satanic or Luciferian forces. In severe cases of repeated destructive spiritual behavior this can evolve to a thought form possession around a certain theme, such as Addiction.

The controllers know that in order to maintain a system of consciousness slavery, they must devise a control based society in which people will obey power structures without the ability to question authority or ensure Accountability of actions. When people believe in the fear based programming set up as belief systems in the 3D world, they easily act as the border guards of the matrix. They are willing to self-enforce unethical laws on others, no matter how corrupt or tyrannical the society. The most important tool for any Controller being that desires to have total power over others in order to steal global resources is to manipulate fear in the minds of people. Whether that narrative of fear is real or imagined is of no consequence, as the mass perception of fear is the only thing that matters. Through the promotion of the mass perception of fear, a Controller may conquer nations, conquer territories and conquer an entire planet. We must see the fear based programming operating in the global scape and understand how it is used in the macrocosm for producing human slavery, in order to free ourselves of the personal fears that make us suffer, building demonic houses that block our highest spiritual expression.[1] 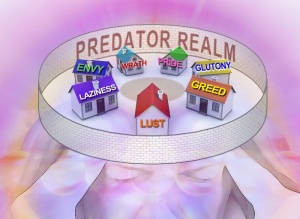 The Imposter Spirit and predator forces attempt to increase the power of the Seven Houses of Ego in shaping and reinforcing human behavior through Mind Control which invite the predator forces to use or possess the mind and body at will. When the body, mind and heart are corrupted by repeated Negative Ego thoughts, actions and deeds, the internal structure to house these energies, these qualities of spirits, will reside in the Houses of Ego. These lower quality spirits manifest tremendous pain and suffering, and are also called Satanic or Luciferian forces. In severe cases of repeated destructive spiritual behavior this can evolve to a thoughtform possession around a certain theme, such as with Addiction. Metatronic Reversal coding such as Splitter Tech runs itself through the signals of the Houses of Ego, hence we must clear ourselves of these predator forces in order to become free from the control of the predator. [2] This is the definition of mental and spiritual bondage to the predator (dark) forces of the Imposter Spirit and the NAA.

As it is understood there are demonic spirits that live in the internal structures of ego (which cause harm to our mind and body) one would be motivated to learn how to create the internal houses for the Spirits of Christ. As the Universal Law of Structure states; we can build our house in so that the spirit we design it for can reside. This is what it means if we give consent to create a House for Christ and to purify ourselves for the Spirits of Christ. The Spirits of Christ requires our Consent to which to build a spiritual house for Christos attributes to dwell inside our mind and body.(See Law of Consent)