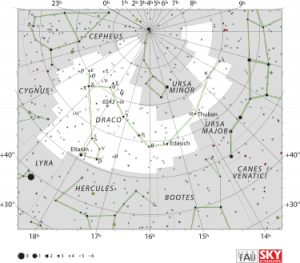 Draco is a constellation in the far northern sky. Its name is Latin for dragon. Draco is circumpolar (that is, never setting) for many observers in the northern hemisphere. It was one of the 48 constellations listed by the 2nd century astronomer Ptolemy, and remains one of the 88 modern constellations today. The north pole of the ecliptic is in Draco. Draco can be seen all year from northern latitudes.

One of the deep-sky objects in Draco is the Cat's Eye Nebula (NGC 6543), a planetary nebula approximately 3,000 light-years away that was discovered by English astronomer William Herschel in 1786.There are several faint galaxies in Draco, one of which is the lenticular galaxy NGC 5866, sometimes considered to be Messier 102. Another is the Draco Dwarf Galaxy, one of the least luminous galaxies with an absolute magnitude of −8.6 and a diameter of only about 3,500 light years, discovered by Albert G. Wilson of Lowell Observatory in 1954.

The Hercules–Corona Borealis Great Wall, the largest known structure in the universe, covers a part of the southern region of Draco.[1] 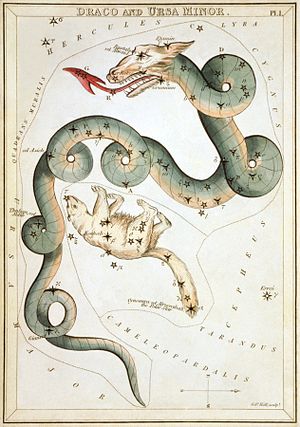 In Greco- Roman legend, Draco was a dragon killed by the goddess Minerva and tossed into the sky upon his defeat. The dragon was one of the Gigantes, who battled the Olympic gods for ten years. As Minerva threw the dragon, it became twisted on itself and froze at the cold North Celestial Pole before it could right itself.

Sometimes, Draco is represented as the demon son of Gaia, named Typhon.

Traditional Arabic astronomy does not depict a dragon in modern-day Draco, which is called the Mother Camels. Instead, two hyenas, represented by Eta Draconis and Zeta Draconis are seen attacking a baby camel (a dim star near Beta Draconis), which is protected by four female camels, represented by Beta Draconis, Gamma Draconis,Nu Draconis, and Xi Draconis. The nomads who own the camels are camped nearby, represented by a cooking tripod composed of Upsilon, Tau, and Sigma Draconis. In some mythology, Draco had one hundred magnificent heads, guarded the golden apple tree, and was put in the sky as a constellation for protecting the apples with valor. The constellation has been subject to many more myths, but ones that are obscure.

The temples in Angkor are arranged to mimic star patterns, specifically the Draco constellation