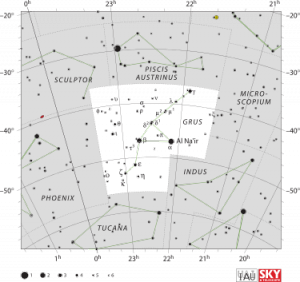 Grus is a constellation in the southern sky. Its name is Latin for the crane, a type of bird. It is one of twelve constellations conceived by Petrus Plancius from the observations of Pieter Dirkszoon Keyser andFrederick de Houtman. Grus first appeared on a 35-cm (14 in) diameter celestial globe published in 1598 in Amsterdam by Plancius and Jodocus Hondius and was depicted in Johann Bayer's star atlas Uranometria of 1603. French explorer and astronomer Nicolas Louis de Lacaille gave Bayer designations to its stars in 1756, some of which had been previously considered part of the neighbouring constellation Piscis Austrinus. The constellations Grus, Pavo, Phoenix and Tucanaare collectively known as the "Southern Birds". The constellation's brightest star, Alpha Gruis, is also known as Alnair and appears as a 1.7-magnitude blue-white star.Beta Gruis is a red giant variable star with a minimum magnitude of 2.3 and a maximum magnitude of 2.0. Six star systems have been found to have planets: the red dwarf Gliese 832 is one of the closest stars to Earth to have a planetary system. Another—WASP-95—has a planet that orbits every two days. Deep-sky objects found in Grus include theplanetary nebula IC 5148, also known as the Spare Tyre Nebula, and a group of four interacting galaxies known as the Grus Quartet.

Grus is bordered by Piscis Austrinus to the north, Sculptor to the northeast, Phoenix to the east, Tucana to the south, Indus to the southwest, and Microscopium to the west. Bayer straightened the tail of Piscis Austrinus to make way for Grus in hisUranometria.[2] Covering 366 square degrees, it ranks 45th of the 88 modern constellations in size and covers 0.887% of the night sky.[1]

Nicknamed the spare-tyre nebula, IC 5148 is a planetary nebula located around 1 degree west of Lambda Gruis. Around 3000 light-years distant, it is expanding at 50 kilometres a second, one of the fastest rates of expansion of all planetary nebulae.