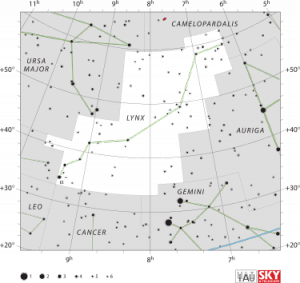 Lynx is a constellation in the northern sky, introduced in the 17th century by Johannes Hevelius. It is named after the lynx, a genus of cat. It is mostly a very faint constellation; its brightest stars form a zigzag line.The only named star in this constellation is Alsciaukat (from the Arabic for thorn), also known as 31 Lyncis, or κ Lyncis. Lynx's most notable deep sky object is the Intergalactic Tramp NGC 2419, also called the "Intergalactic Wanderer", a globular cluster that is one of the most distant known of its kind at a distance of 300,000 light-years from Earth. It is likely that NGC 2419 is in a highly elliptical orbit around the Milky Way. [1]

The Lynx has often played an important role in mythology, because it is such an elusive, ghost-like animal that sees without being seen. Because of it's qualities of silence and watching, the Lynx has also been associated with scientists, and the search for knowledge.[2] 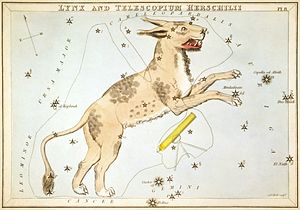