Project MKUltra — sometimes referred to as the CIA's Mind Control program — was the code name given to a illegal and clandestine program of experiments on human subjects, designed and undertaken by the United States Central Intelligence Agency (CIA). Experiments on humans were intended to identify and develop drugs and procedures to be used in interrogations and torture, in order to weaken the individual to force confessions through mind control.

Organized through the Scientific Intelligence Division of the Central Intelligence Agency (CIA), the project coordinated with the Special Operations Division of the U.S. Army's Chemical Corps.The program began in the early 1950s, was officially sanctioned in 1953, was reduced in scope in 1964, further curtailed in 1967 and officially halted in 1973.The program engaged in many illegal activities;in particular it used unwitting U.S. and Canadian citizens as its test subjects, which led to controversy regarding its legitimacy.(p74)

The scope of Project MKUltra was broad, with research undertaken at 80 institutions, including 44 colleges and universities, as well as hospitals, prisons and pharmaceutical companies. The CIA operated through these institutions using front organizations, although sometimes top officials at these institutions were aware of the CIA's involvement. As the Supreme Court later noted, MKULTRA was:

"concerned with "the research and development of chemical, biological, and radiological materials capable of employment in clandestine operations to control human behavior." The program consisted of some 149 subprojects which the Agency contracted out to various universities, research foundations, and similar institutions. At least 80 institutions and 185 private researchers participated. Because the Agency funded MKULTRA indirectly, many of the participating individuals were unaware that they were dealing with the Agency.

Project MKUltra was first brought to public attention in 1975 by the Church Committee of the U.S. Congress, and a Gerald Ford commission to investigate CIA activities within the United States. Investigative efforts were hampered by the fact that CIA Director Richard Helms ordered all MKUltra files destroyed in 1973; the Church Committee and Rockefeller Commission investigations relied on the sworn testimony of direct participants and on the relatively small number of documents that survived Helms' destruction order.

In 1977, a Freedom of Information Act request uncovered a cache of 20,000 documents relating to project MKUltra, which led to Senate hearings later that same year.[3][14] In July 2001 some surviving information regarding MKUltra was officially declassified. 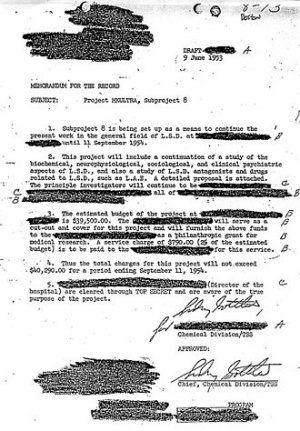 Dr. Sidney Gottlieb approved of an MKUltra subproject on LSD in this June 9, 1953 letter.

Precursor experiments. In 1945 the Joint Intelligence Objectives Agency was established and given direct responsibility for Operation Paperclip. The program recruited former Nazi scientists, some of whom had been identified and prosecuted as war criminals during the Nuremberg Trials.

The project's intentionally oblique CIA cryptonym is made up of the digraph MK, meaning that the project was sponsored by the agency's Technical Services Staff, followed by the word Ultra (which had previously been used to designate the most secret classification of World War II intelligence). Other related cryptonyms include Project MKNAOMI and Project MKDELTA.

Headed by Sidney Gottlieb, the MKUltra project was started on the order of CIA director Allen Welsh Dulles on April 13, 1953.[17] Its aim was to develop mind-controlling drugs for use against the Soviet bloc, largely in response to alleged Soviet,Chinese, and North Korean use of mind control techniques on U.S. prisoners of war in Korea.[18] The CIA wanted to use similar methods on their own captives. The CIA was also interested in being able to manipulate foreign leaders with such techniques,[19] and would later invent several schemes to drug Fidel Castro. Experiments were often conducted without the subjects' knowledge or consent.[20] In some cases, academic researchers being funded through grants from CIA front organizations were unaware that their work was being used for these purposes.

In 1964, the project was renamed MKSEARCH. The project attempted to produce a perfect truth drug for use in interrogating suspected Soviet spies during the Cold War, and generally to explore any other possibilities of mind control. Another MKUltra effort, Subproject 54, was the Navy's top secret "Perfect Concussion" program, which was supposed to use sub-aural frequency blasts to erase memory. However, the program was never carried out.[22] Because most MKUltra records were deliberately destroyed in 1973 by order of then CIA director Richard Helms, it has been difficult, if not impossible, for investigators to gain a complete understanding of the more than 150 individually funded research sub-projects sponsored by MKUltra and related CIA programs.

The project began during a period of what Rupert Cornwell described as "paranoia" at the CIA, when America had lost its nuclear monopoly, and fear of Communism was at its height.[24] James Jesus Angleton, head of CIA counter-intelligence, believed that the organization had been penetrated by a mole at the highest levels.

The Agency poured millions of dollars into studies examining methods of influencing and controlling the mind, and of enhancing their ability to extract information from resistant subjects during interrogation. Some historians have asserted that creating a "Manchurian Candidate" subject through "mind control" techniques was a goal of MKUltra and related CIA projects.[27] Alfred McCoy has claimed that the CIA attempted to focus media attention on these sorts of "ridiculous" programs, so that the public would not look at the primary goal of the research, which was developing effective methods of torture and interrogation. Such authors cite as one example that the CIA's KUBARK interrogation manual refers to "studies at McGill University", and that most of the techniques recommended in KUBARK are exactly those that researcher Donald Ewen Cameron used on his test subjects (sensory deprivation, drugs, isolation, etc.). One 1955 MKUltra document gives an indication of the size and range of the effort; this document refers to the study of an assortment of mind-altering substances described as follows: 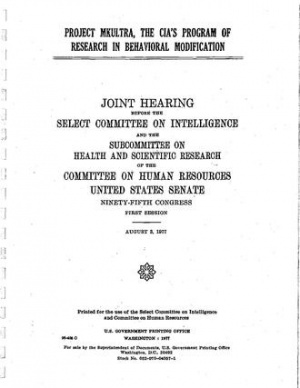 Frank Church headed the Church Committee, an investigation into the practices of the US intelligence agencies. In 1973, with the government-wide panic caused by Watergate, the CIA Director Richard Helms ordered all MKUltra files destroyed.[49]Pursuant to this order, most CIA documents regarding the project were destroyed, making a full investigation of MKUltra impossible. A cache of some 20,000 documents survived Helms' purge, as they had been incorrectly stored in a financial records building and were discovered following a FOIA request in 1977. These documents were fully investigated during the Senate Hearings of 1977.

In December 1974, The New York Times alleged that the CIA had conducted illegal domestic activities, including experiments on U.S. citizens, during the 1960s. That report prompted investigations by the U.S. Congress, in the form of the Church Committee, and by a presidential commission known as the Rockefeller Commission that looked into domestic activities of the CIA, the FBI, and intelligence-related agencies of the military.

In the summer of 1975, congressional Church Committee reports and the presidential Rockefeller Commission report revealed to the public for the first time that the CIA and the Department of Defense had conducted experiments on both unwitting and cognizant human subjects as part of an extensive program to influence and control human behavior through the use of psychoactive drugs such as LSD and mescaline and other chemical, biological, and psychological means. They also revealed that at least one subject had died after administration of LSD. Much of what the Church Committee and the Rockefeller Commission learned about MKUltra was contained in a report, prepared by the Inspector General's office in 1963, that had survived the destruction of records ordered in 1973.[50] However, it contained little detail. Sidney Gottlieb, who had retired from the CIA two years previously, was interviewed by the committee but claimed to have very little recollection of the activities of MKUltra.

The congressional committee investigating the CIA research, chaired by Senator Frank Church, concluded that "[p]rior consent was obviously not obtained from any of the subjects". The committee noted that the "experiments sponsored by these researchers ... call into question the decision by the agencies not to fix guidelines for experiments."

Following the recommendations of the Church Committee, President Gerald Ford in 1976 issued the first Executive Order on Intelligence Activities which, among other things, prohibited "experimentation with drugs on human subjects, except with the informed consent, in writing and witnessed by a disinterested party, of each such human subject" and in accordance with the guidelines issued by the National Commission. Subsequent orders by Presidents Carter and Reagan expanded the directive to apply to any human experimentation.

In 1977, during a hearing held by the Senate Select Committee on Intelligence, to look further into MKUltra, Admiral Stansfield Turner, then Director of Central Intelligence, revealed that the CIA had found a set of records, consisting of about 20,000 pages, that had survived the 1973 destruction orders because they had been stored at a records center not usually used for such documents. These files dealt with the financing of MKUltra projects and contained few project details, however much more was learned from them than from the Inspector General's 1963 report.

On the Senate floor in 1977, Senator Ted Kennedy said:

"The Deputy Director of the CIA revealed that over thirty universities and institutions were involved in an "extensive testing and experimentation" program which included covert drug tests on unwitting citizens "at all social levels, high and low, native Americans and foreign." Several of these tests involved the administration of LSD to "unwitting subjects in social situations."

At least one death, that of Dr. Olson, resulted from these activities. The Agency itself acknowledged that these tests made little scientific sense. The agents doing the monitoring were not qualified scientific observers. In Canada, the issue took much longer to surface, becoming widely known in 1984 on a CBC news show, The Fifth Estate. It was learned that not only had the CIA funded Dr. Cameron's efforts, but perhaps even more shockingly, the Canadian government was fully aware of this, and had later provided another $500,000 in funding to continue the experiments. This revelation largely derailed efforts by the victims to sue the CIA.[2]