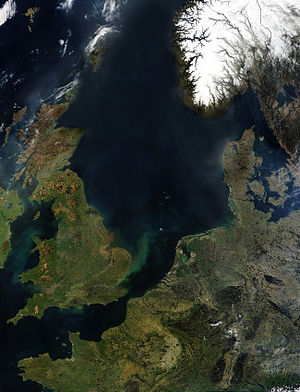 The North Sea is a sea of the Atlantic Ocean between Great Britain, Norway, Denmark, Germany, the Netherlands, Belgium and France. An epeiric (or "shelf") sea on the European continental shelf, it connects to the ocean through the English Channel in the south and the Norwegian Sea in the north. It is more than 970 kilometres (600 mi) long and 580 kilometres (360 mi) wide, covering 570,000 square kilometres (220,000 sq mi).

It has long hosted key north European shipping lanes as well as provided a major fishery. The coast is a popular destination for recreation and tourism in bordering countries, and more recently the sea has developed into a rich source of energy resources, including fossil fuels, wind, and early efforts in wave power.

Historically, the North Sea has featured prominently in geopolitical and military affairs, particularly in Northern Europe. It was also important globally through the power northern Europeans projected worldwide during much of the Middle Ages and into the modern era. The North Sea was the centre of the Vikings' rise. Subsequently, the Hanseatic League, the Dutch Republic, and the British each sought to gain command of the North Sea and thus access to the world's markets and resources. As Germany's only outlet to the ocean, the North Sea continued to be strategically important through both World Wars.

The coast has diverse geology and geography. In the north, deep fjords and sheer cliffs mark much of its Norwegian and Scottish coastlines respectively, whereas in the south, the coast consists mainly of sandy beaches, estuaries of long rivers and wide mudflats. Due to the dense population, heavy industrialization, and intense use of the sea and area surrounding it, there have been various environmental issues affecting the sea's ecosystems. Adverse environmental issues – commonly including overfishing, industrial and agricultural runoff, dredging, and dumping, among others – have led to a number of efforts to prevent degradation and to safeguard the long-term economic benefits.[1]