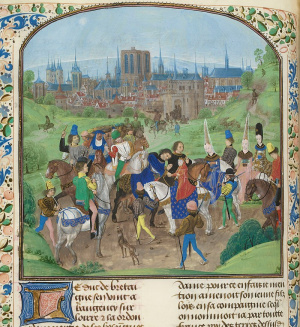 The Cathedral of Notre Dame in the 15th century, illuminated by the Master of Anthony of Burgundy

Notre Dame de Paris, meaning "Our Lady of Paris", referred to simply as Notre-Dame, is a medieval Catholic cathedral on the Île de la Cité in the 4th arrondissement of Paris. The cathedral was consecrated to the Virgin Mary and considered to be one of the finest examples of French Gothic architecture. Its pioneering use of the rib vault and flying buttress, its enormous and colourful rose windows, as well as the naturalism and abundance of its sculptural decoration set it apart from the earlier Romanesque style. Major components that make Notre Dame stand out include one of the world's largest organs and its immense church bells.

The cathedral's construction began in 1160 under Bishop Maurice de Sully and was largely complete by 1260, though it was modified frequently in the following centuries. In the 1790s, Notre-Dame suffered desecration during the French Revolution; much of its religious imagery was damaged or destroyed. In the 19th century, the cathedral was the site of the coronation of Napoleon I and funerals of many Presidents of the Republic.

The cathedral was one of the most widely recognized symbols of the city of Paris and the French nation. As the cathedral of the Archdiocese of Paris, Notre-Dame contains the cathedra of the Archbishop of Paris (Michel Aupetit). In 1805, Notre-Dame was given the honorary status of a minor basilica. Approximately 12 million people visit Notre-Dame annually, making it the most visited monument in Paris. The cathedral was renowned for its Lent sermons, founded by the Dominican Jean-Baptiste Henri Lacordaire in the 1830s. In recent years, an increasing number have been given by leading public figures and state-employed academics.

The cathedral has been progressively stripped of its original decoration and works of art. Several noteworthy examples of Gothic, Baroque, and 19th-century sculptures and a group of 17th- and early 18th-century altarpieces remain in the cathedral's collection. Some of the most important relics in Christendom, including the Crown of Thorns, a sliver of the true cross and a nail from the true cross, are preserved at Notre-Dame.

While undergoing renovation and restoration, the roof of Notre-Dame caught fire on the evening of 15 April 2019. Burning for around 15 hours, the cathedral sustained serious damage, including the destruction of the flèche (the timber spire over the crossing) and most of the lead-covered wooden roof above the stone vaulted ceiling. Contamination of the site and the nearby environment resulted. Following the April fire, many proposals were made for modernizing the cathedral's design. However, on 16 July 2019, the French Parliament passed a law requiring that it be rebuilt exactly as it appeared before the fire.[1]