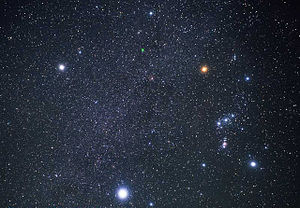 Fixed star Sirius, Alpha Canis Majoris, is a brilliant white and yellow star, the brightest star in the sky. It is positioned in the neck of Canis Major, the Greater Dog.

The naming of the fixed star Sirius, the Dog-star, derives from the Greek Σείριος Seirios, (Sparking, Scorching). In Egypt it was Sothis, and is depicted with Jupiter in the Dendera Zodiac, as Jupiter was conjunct Sirius during the solar eclipse of 51 BC, the day that Cleopatra’s father died. The ancient Egyptian calendar was based on lunar cycles of around 30 days and on the helical rising of the fixed star Sirius.

Fixed star Sirius is of the nature of Jupiter and Mars. It gives honor, renown, wealth, ardor, faithfulness, devotion, passion and resentment, and makes its natives custodians, curators and guardians. It also gives danger of dog bites, and two examples of this effect will be found under Procyon.

Sirius is one of the 15 Behenian Fixed Stars. Its image is a hound or a little virgin. It gives honor, the goodwill and favor of men and the airy spirits, and the power to pacify nobles and others. Rules beryl, savine, mugwort, draginwort and the tongue of a snake. Sirius rules the nipple of the right breast in the human body.

Well connected, it promises fame, honors and riches. On the Ascendant and with Mars combined, Sirius can be quite dangerous, pushing ahead with too much ambition is then seen, resulting in dangers by injuries or attempts on the native’s life. According to tradition, Sirius will give a famous death with honors beyond the grave, if positioned in the 8th house. In good aspect with Mars and Jupiter and close to the MC, promise is given of gaining extensive wealth, a lucky hand in commercial enterprise or matters of government. This star so placed is most excellent for military, lawyers and civil servants. Sirius in conjunction with the Sun and well placed in the chart will be found to be the case with numerous important and famous personalities. Possibly, the rise in station is made possible by protection from people of influence.[1]