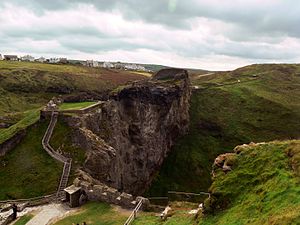 Tintagel is a small town on the western edge of Cornwall, in a prominent space as this region is close to an important gateway system that operates as a main hub for operating all of the Trinity Gates. Many people that need safe passage when they drop their body at this time, are taken through Trinity Gates through the Aqua Portal, if they are not able to sustain higher frequencies. The Tintagel landscape is gridded into the constellation Ursa Major with direct links into the Polarian gate. The Polarian Gate is connected to the larger Ascension Hosting network that opens into the passageway from the Milky Way to Andromeda where the Ascension Earth is located in the Aquaelle matrix.

The literal interpretation of King Arthur being conceived and birthed at Tintagel by some, is actually pointing to the spiritual means through which the Solar Logos is birthed on the earth when coming from the Stars. Tintagel holds a celestial frequency of this energizing solar star stream that is connected to the Solar Rishi and Arthurian Christ, rather than Tintagel being the place of conception and the literal birth of his physical being.

King Arthur represents the Solar Logos or Krystic consciousness aspect that can be connected to through this archetype on the earth. The birthplace of Arthur represents the birth of the Golden Christ Child, where the Solar Angelic presence can be communed with by the sensitive spiritual seeker. That Solar presence can be intentionally directed to animate and energize the awakening within and that of the Albion body.

Through the solar star streams that contain the instruction set for the 11th chakra Buddhic body, Tintagel also represents the Dark Universal Mother principle that has its destiny to eventually spiritually progress from out of its lunar forms, in order to be transmogrified through the Solar Light Fire of the Holy Father principle. Thus, Tintagel holds an important piece in the land for lunar form transfiguration, the hierogamic path of cracking open the Buddhic egg, in which King Arthur is its natural gatekeeper.[1]