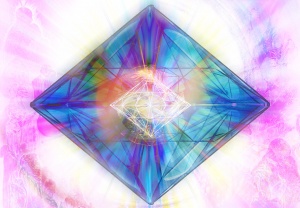 The Azura Point or Permanent Seed Atom of the higher heart complex allows the activation of the internal heart flame to open the inner sanctum or heart doorway which is then able to receive a feedback loop and direct communication between God source and the individuated being in the manifestation fields. The Azura is activated during the monadic integration phase of spiritual ascension, in which the monad generates the inner light that projects through the permanent seed atom which is located in the Azura Point. The Azura Point is also the inner sanctum of the higher heart complex, this is the area to focus upon to open and flower the heart complex, in which one may then connect with the entire Universe, and communicate directly with the Krystal Star Guardian Founder Races.

This is about igniting the Christ Consciousness eternal Seed Atom and bringing that on line. The Monadic spark starts to connect to the Seed Atom, which holds the blueprint for Christ Consciousness and our Crystal Lotus Body. This is the Seed that the controllers are attempting to crush or stop from flowering in the human population. They want to crush the Permanent Seed Atom in the Thymus Gland, which is the 8th Chakra, which is where the Monad starts coming in and actually connecting in to the physical body.[1]