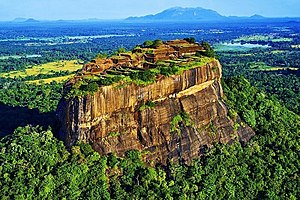 Sigiriya or Sinhagiri (Lion Rock Sinhala: සීගිරිය, Tamil: சிகிரியா/சிங்ககிரி, pronounced see-gi-ri-yə) is an ancient rock fortress located in the northern Matale District near the town of Dambulla in the Central Province, Sri Lanka. The name refers to a site of historical and archaeological significance that is dominated by a massive column of rock nearly 200 metres (660 ft) high.

According to the ancient Sri Lankan chronicle the Culavamsa, this site was selected by King Kashyapa (477 – 495 AD) for his new capital. He built his palace on the top of this rock and decorated its sides with colourful frescoes. On a small plateau about halfway up the side of this rock he built a gateway in the form of an enormous lion. The name of this place is derived from this structure — Sīnhāgiri, the Lion Rock (an etymology similar to Sinhapura, the Sanskrit name of Singapore, the Lion City).

The environment around the Sigiriya may have been inhabited since prehistoric times. There is clear evidence that the many rock shelters and caves in the vicinity were occupied by Buddhist monks and ascetics from as early as the 3rd century BC. The earliest evidence of human habitation at Sigiriya is the Aligala rock shelter to the east of Sigiriya rock, indicating that the area was occupied nearly five thousand years ago during the Mesolithic Period.

The Gardens of the Sigiriya city are one of the most important aspects of the site, as they are among the oldest landscaped gardens in the world. The gardens are divided into three distinct but linked forms: water gardens, cave and boulder gardens, and terraced gardens.

The capital and the royal palace were abandoned after the king's death. It was used as a Buddhist monastery until the 14th century. Sigiriya today is a UNESCO listed World Heritage Site. It is one of the best preserved examples of ancient urban planning. [1]