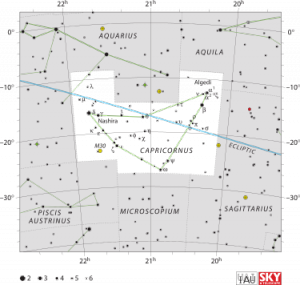 Capricornus is one of the constellations of the zodiac; it is often called Capricorn, especially when referring to the corresponding astrological sign. Its name is Latin for "horned goat" or "goat horn", and it is commonly represented in the form of a sea-goat: a mythical creature that is half goat, half fish. Its symbol is (Unicode ♑).

Capricornus is one of the 88 modern constellations, and was also one of the 48 constellations listed by the 2nd century astronomer Ptolemy. Under its modern boundaries it is bordered by Aquila, Sagittarius, Microscopium, Piscis Austrinus, and Aquarius. The constellation is located in an area of sky called the Sea or the Water, consisting of many water-related constellations such as Aquarius, Pisces and Eridanus. It is the smallest constellation in the zodiac.

Several galaxies and star clusters are contained within Capricornus.Messier 30 is a globular cluster located 1 degree south of the galaxy group NGC 7103. The constellation also harbors the wide spiral galaxy NGC 6907.Capricorn is a faint constellation, with only one star above magnitude 3; its alpha star has a magnitude of only 3.6.[1]

Despite its faintness, Capricornus has one of the oldest mythological associations, having been consistently represented as a hybrid of a goat and a fish since the Middle Bronze Age. First attested in depictions on a cylinder-seal from around the 21st century BC, it was explicitly recorded in the Babylonian star catalogues as MULSUḪUR.MAŠ "The Goat-Fish" before 1000 BC. The constellation was a symbol of the god Ea and in the Early Bronze Age marked the winter solstice. Due to the precession of the equinoxes the December solstice no longer takes place while the sun is in the constellation Capricornus, as it did until 130 BCE, but the astrological sign called Capricorn begins with the solstice. The solstice now takes place when the Sun is in Sagittarius. The sun's most southerly position, which is attained at the northern hemisphere's winter solstice, is now called the Tropic of Capricorn, a term which also applies to the line on the Earth at which the sun is directly overhead at noon on that solstice. The Sun is now in Capricorn from late January through mid-February.[2] 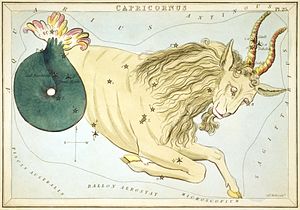 In Greek mythology, the constellation is sometimes identified as Amalthea, the goat that suckled the infant Zeus after his mother, Rhea, saved him from being devoured by his father, Cronos. The goat's broken horn was transformed into the cornucopia or horn of plenty.[citation needed] Capricornus is also sometimes identified as Pan, the god with a goat's head, who saved himself from the monster Typhon by giving himself a fish's tail and diving into a river. The planet Neptune was discovered in Capricornus by German astronomer Johann Galle, near Deneb Algedi (δ Capricorni) on September 23, 1846, which is appropriate as Capricornus can be seen best from Europe at 4:00am in September.[3]

Fermentation is the spiritual alchemical process which shifts the production and source of energy that is required for the body functions. This stage begins to change how the ATP production is made in the mitochondria of the cells and how that energy is distributed to cellular tissues. New requirements of vital energies are manufactured by increasing the ATP pump which increase available energy needed to continue the life processes. There is an increase of ATP measured in the cells as the person is able to hold more light in their physical cells, increasing their consciousness. This also relates to increasing the size and quality of the auric light body. The body is much physically stronger now even if vitality feels low. Also, the fermentation process is used to produce different levels of enzymatic substances, which the physical body uses to support a variety of shifting hormonal and chemical reactions. During the ascension stages of symptoms, this is commonly experienced as a highly physical shift in the digestive, immune and brain processing.[4]