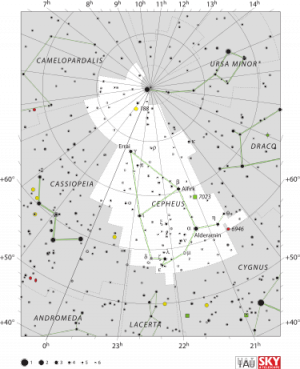 Cepheus is a constellation in the northern sky. It is named after Cepheus, King of Aethiopia in Greek mythology. It was one of the 48 constellations listed by the 2nd century astronomer Ptolemy, and remains one of the 88 modern constellations. Its brightest star is Alpha Cephei with an apparent magnitude of 3.5. Delta Cephei is the prototype of an important class of star known as a Cepheid variable. RW Cephei, an orange hypergiant, together with the red supergiantsMu Cephei, VV Cephei and V354 Cephei are among the largest stars known. In addition, Cepheus also has the hyperluminous quasar S5 0014+81, hosting an ultramassive black hole in its core at 40 billion solar masses, about 10,000 times more massive than the central black hole of the Milky Way, making it the most massive black hole known in the universe.

Cepheus was the King of Aethiopia. He was married to Cassiopeia and was the father of Andromeda, both of whom are immortalized as modern day constellations along with Cepheus.Cepheus is most commonly depicted as holding his arms aloft, praying for the gods to spare the life of Andromeda. He is also depicted as a more regal monarch sitting on his throne. 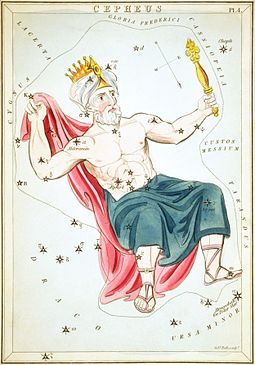 Cepheus is a crowned king in royal robes, whose foot is planted on the Pole star (Polaris). On the Farnese globe (2nd century A.D.) he is depicted in the garb of a tragic actor. He was the son of Belus (Belos), king of Egypt. Cepheus is husband of Cassiopeia, and their daughter is Andromeda. His wife was proud of their daughter's beauty and boasted that Andromeda was more beautiful than the Sea Nymphs, the Nereids who were daughters of Poseidon (Neptune). The Nereids complained to Poseidon who sent a sea monster, Cetus, to ravage the coast. With his kingdom in grave danger Cepheus consulted the oracle of Ammon in Libya for advice. He learned that the only way to save his kingdom was to sacrifice his daughter to the sea monster. Andromeda is chained to a rock and left to the mercy of the monster. The hero, Perseus, arrives at the scene and falls in love with Andromeda, he has a quick consultation with Cepheus and Cassiopeia, it is agreed that if he rescues their daughter he could marry her. The sea monster arrives and Perseus kills it. Perseus breaks the chains that bind Andromeda to the rock. The wedding follows.

The later Hindus knew Cepheus, or Kepheus, as Capuja, adopted from Greece; but a linguist (George Hewitt) claims that with their prehistoric ancestors Cepheus represented Kapi, the Ape-God, when its stars alpha and gamma, Alderamin and Alrai, were the respective pole-stars of 21,000 and 19,000 B.C. [Allen, Star Names]. A word for 'ape' is common to Greek kepos and Sanskrit kapi, or kapih, these words also link, with k/mute alteration, with Germanic and Celtic words like Old Norse api, Old English apa, Old High German affo, Welsh epa and Irish apa, 'ape'. The Greek word kepos, ape, resembles cepheus or kepheos.[1]