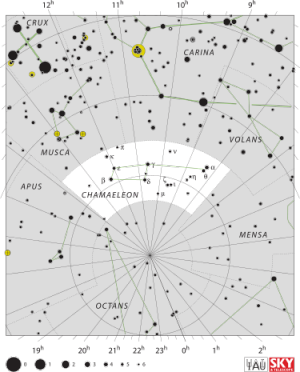 Chamaeleon is a small constellation in the southern sky. It is named after the chamaeleon, a kind of lizard. It was first defined in the 16th century. Chamaeleon was one of twelve constellations created by Petrus Plancius from the observations of Pieter Dirkszoon Keyser and Frederick de Houtman.[2] It first appeared on a 35-cm diameter celestial globe published in 1597 (or 1598) inAmsterdam by Plancius and Jodocus Hondius. Johann Bayer was the first uranographer to put Chamaeleon in a celestial atlas. It was one of many constellations created by European explorers in the 15th and 16th centuries out of unfamiliar Southern Hemisphere stars.

n 1999, a nearby open cluster was discovered centered on the star η Chamaeleontis. The cluster, known as either the Eta Chamaeleontis cluster or Mamajek 1, is 8 million years old, and lies 316 light years from Earth.

The constellation contains a number of molecular clouds (the Chamaeleon dark clouds) that are forming low-mass T Tauri stars. The cloud complex lies some 400 to 600 light years from Earth, and contains tens of thousands of solar masses of gas and dust. The most prominent cluster of T Tauri stars and young B-type stars are in the Chamaeleon I cloud, and are associated with the reflection nebula IC 2631.

Chamaeleon contains one planetary nebula, NGC 3195, which is fairly faint. It appears in a telescope at about the same apparent size as Jupiter.[1]