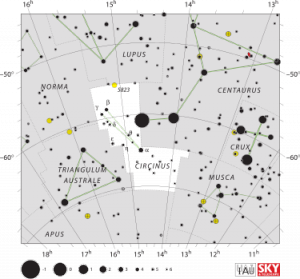 Circinus is a small faint constellation in the southern sky, first defined in 1756 by French astronomer Nicolas Louis de Lacaille. Its name is Latin for compass, referring to the drafting tool used for drawing circles (it should not be confused withPyxis, a constellation that represents a mariner's compass which points north). Its brightest star is Alpha Circini, with anapparent magnitude of 3.19. Slightly variable, it is the brightest rapidly oscillating Ap star in the night sky. AX Circini is aCepheid variable visible with the unaided eye, and BX Circini is a faint star thought to have been formed from the merger of two white dwarfs. Two sun-like stars have planetary systems: HD 134060 has two small planets, and HD 129445 has aJupiter-like planet. Supernova SN 185 appeared in Circinus in 185 AD and was recorded by Chinese observers. Twonovae have been observed more recently, in the 20th century. The Milky Way runs through the constellation, featuring prominent objects such as the open cluster NGC 5823 and theplanetary nebula NGC 5315. Circinus hosts one notable spiral galaxy, the Circinus Galaxy, which was discovered in 1977 and is the closest Seyfert galaxy to the Milky Way. The Alpha Circinids (ACI), a meteor shower also discovered in 1977, radiate from this constellation. Bordered by Centaurus, Musca, Apus, Triangulum Australe, Norma and Lupus, Circinus lies adjacent to the Alpha andBeta Centauri stars.

Circinus is from Latin circinus, pair of compasses, from circus, circle (not to be confused with the Mariner's Compass of the constellation Pyxis). A compass, also called a pair of compasses, or a drafting compass, is a technical drawing instrument that can be used for inscribing circles or arcs. It can also be used as a tool to measure distances, in particular on maps, for mathematics, drafting, navigation, building, carpentry, and other purposes.masonTwo of the principal symbols always found in a Masonic Lodge are the square and compasses. An adjacent constellation, Norma, is the Square. The two together are the emblems of masonry, and the symbol of Freemasonry. [1]