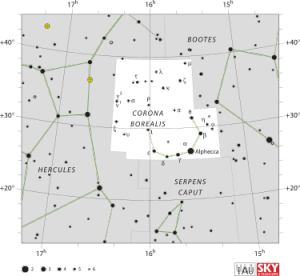 Corona Borealis is a small constellation in the Northern Celestial Hemisphere. Its Latin name means "northern crown", a name inspired by its shape; its main stars form a semicircular arc. It is the northern counterpart ofCorona Australis, the southern crown. One of the 48 constellations listed by the 2nd-century astronomer Ptolemy, it remains one of the 88 modern constellations. In classical mythology Corona Borealis generally represented a crown given by the god Dionysus to the Cretan princess Ariadne and set by him in the heavens. Other cultures likened the pattern to a circle of elders, eagle's nest, bear's den or even a smokehole.

The brightest star is the 2.2-magnitude Alpha Coronae Borealis. Five star systems have been found to have exoplanets, four of which were detected by changes in radial velocity and one by transit photometry. The yellow supergiant R Coronae Borealis is the prototype of a rare class of unusual stars—the R Coronae Borealis variables—that are extremely hydrogen deficient, and thought to result from the merger of two white dwarfs. T Coronae Borealis, also known as the Blaze Star, is another unusual type of variable star known as a recurrent nova.

In November 2013 astronomers discovered the largest structure in the universe ever found—the Hercules–Corona Borealis Great Wall, which lies partly within this constellation's borders. The structure is a galaxy filament,[50] or a huge group of galaxies assembled by gravity. It is about 10 billion light-years (3 Gpc) at its longest dimension.[1]

In Greek mythology, Corona Borealis was linked to the legend of Theseus and the minotaur. It was generally considered to represent a crown that was given by Dionysus to Ariadne, the daughter of Minos of Crete, after she had been abandoned by the Athenian prince Theseus. When she wore the crown to her wedding, where she married Dionysus, he placed her crown in the heavens to commemorate the wedding. An alternate version has the besotted Dionysus give the crown to Ariadne, who in turn gives it to Theseus after he arrives in Crete to kill the minotaur that the Cretans have demanded tribute from Athens to feed. The hero uses the crown's light to escape the labyrinth after disposing of the creature, and Dionysus later sets it in the heavens.The Latin author Hyginus linked it to a crown or wreath worn by Bacchus (Dionysus) to disguise his appearance when first approaching Mount Olympus and revealing himself to the gods, having being previously hidden as yet another child of Jupiter's trysts with a mortal, in this case Semele. In Welsh mythology, it was called Caer Arianrhod, "the Castle of the Silver Circle", and was the heavenly abode of the Lady Arianrhod. It was one of the 48 constellation mentioned in the Almagest of classical astronomer Ptolemy. 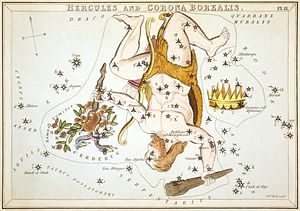 The Skidi people of Native Americans saw the stars of Corona Borealis representing a council of stars whose chief was Polaris. The constellation also symbolised the smokehole over a fireplace, which conveyed their messages to the gods, as well as how chiefs should come together to consider matters of importance. TheMi'kmaq of eastern Canada saw Corona Borealis as Mskegwǒm, the den of the celestial bear (Alpha, Beta, Gamma and Delta Ursae Majoris).[57] Polynesian peoples often recognized Corona Borealis; it was likely called Te Hetu in the Tuamotus, whose people called the constellation Na Kaua-ki-tokerau. InHawaii, the constellation was likely called Kaua-mea; it was called Rangawhenua in New Zealand. The figure of Corona Borealis was called Te Wale-o-Awitu inPukapuka. Its name in Tonga was unsure; it was either called Ao-o-Uvea or Kau-kupenga.[2]