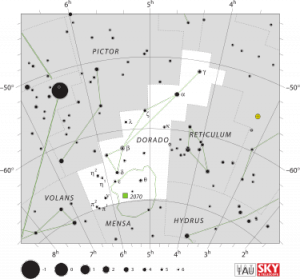 Dorado is a constellation in the southern sky. It was named in the late 16th century and is now one of the 88 modern constellations. Its name refers to the dolphinfish (Coryphaena hippurus), which is known as dorado in Portuguese, although it has also been depicted as a swordfish. Dorado is notable for containing most of the Large Magellanic Cloud, the remainder being in the constellation Mensa. The South ecliptic pole also lies within this constellation.Even though the name Dorado is not Latin but Portuguese, astronomers give it the Latin genitive form Doradus when naming its stars; they are treating it (like the adjacent constellation Argo Navis) as if it were a feminine proper name of Greek origin ending in -ō (like Io or Callisto or Argo), names that have a genitive ending in -ūs. Its first depiction in a celestial atlas was in Johann Bayer's Uranometria of 1603 where it was also named Dorado. Dorado has been represented historically as a dolphinfish and a swordfish; the latter depiction is inaccurate. It has also been represented as a goldfish.

Because Dorado contains part of the Large Magellanic Cloud, it is rich in deep sky objects. The Large Magellanic Cloud, 1,000 light-years in diameter, is a satellite galaxy of the Milky Way, located at a distance of 179,000 light-years. It has been deformed by its gravitational interactions with the larger Milky Way. In 1987, it became host to SN 1987A, the first supernova of 1987 and the closest since 1604.This 25,000 light-year wide galaxy contains over 10,000 million stars. All coordinates given are for Epoch J2000.0. 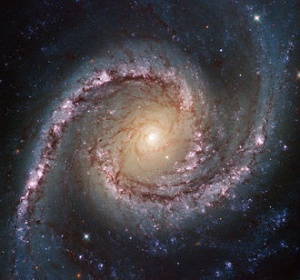 The Mahi-mahi, Coryphaena hippurus, also known as dolphin-fish, dorado, or lampuki (in Maltese), are surface-dwelling ray-finned fish found in off-shore tropical and subtropical waters worldwide. The name 'mahi-mahi' ('strong-strong' in Hawaiian). When they are removed from the water, the fish often change between several colors, this being the reason for their name in Spanish Dorado Maverikos, finally fading to a muted yellow-grey upon death. [2] Dorado fish are also commonly known as maverikos; related to the English wordmaverick. The word maverick is an eponym, deriving from the name Samuel Augustus Maverick (1803-1870), an American cattleman who left the calves in his herd unbranded. In common usage a maverick is a rebellious person, especially a loner who opposes established rules. “'Treasury' (thesaurus) is named after the Greek term thesis, 'positing,' that is, 'deposit.' Thusthesis means 'positing,' and the term has combined a Greek with a Latin word, for the elementthes means 'deposit' in Greek, and Latin supplies aurum ('gold'), so that the word thesaurussounds like the combination 'gold deposit.' An auraria (i.e. a kind of tax; also a gold mine) takes its name from gold (aurum).” [The Etymologies of Isidore of Seville, 7th century AD, p.329.]

El Dorado or Eldorado (Spanish for 'the gilded one') is a metaphor applied to any place of fabulous wealth or inordinately great opportunity. El Dorado is a legendary city or historical region of the New World, somewhere in South America. El Dorado is a legend that began with the story of a South American tribal chief who covered himself with gold dust and would dive into a lake of pure mountain water. As the story was told and re-told, El Dorado came to be viewed as a city containing immense wealth, a legend that inspired many explorers from the 1500s on. According to Freyle, the king or chief priest of the Muisca was said to be ritually covered with gold dust at a religious festival held in Lake Guatavita, near present-day Bogotá. The story of El Dorado was embellished with accounts of his golden city, the mythical Manoa where even the cooking utensils were made of gold. Explorers and adventurers took off on the hunch that the city was located somewhere in the unexplored forests of the Amazon valley, and vanished into the jungle, scores never returning.[1]