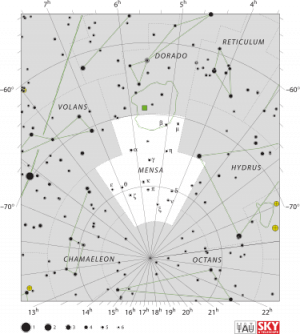 Mensa is a constellation in the southern sky, created in the 18th century. Its name is Latin for table. It covers a keystone-shaped wedge of sky stretching from approximately 4h to 7.5h of right ascension, and −71 to −85.5 degrees of declination. Other than the south polar constellation of Octans, it is the most southerly of constellations. As a result, it is essentially unobservable from the Northern Hemisphere. Besides those already mentioned, its other neighbouring constellations are Chamaeleon, Dorado, Hydrus, and Volans. It is the only constellation named after a feature on Earth. [1]

The constellation Mensa is close to the South Pole (in Octans), and named by La Caille who originally called it Mons Mensae after Table Mountain, the name of the mountain near his observatory in Cape Town, South Africa. A mensa land formation has steep walls and a relatively flat top.

There are three legends directly linked to this mountain constellation, Mensa, and its table-cloth the Large Magellanic Cloud galaxy.

1. Van Hunks and the Devil: There is a story about how this tablecloth was formed. Devil's Peak (on the side of this table-mountain) was originally known as Windberg, and supposedly gets its current name from the folk-tale about a Dutch man called Jan van Hunks, a prodigious pipe smoker who lived at the foot of the mountain circa 1700. He was forced by his wife to leave the house whenever he smoked his pipe. One day, while smoking on the slopes of the peak, he met a mysterious stranger who also smoked. They each bragged of how much they smoked and so they fell into a pipe-smoking contest. The stranger turned out to be the Devil and Van Hunks eventually won the contest, but not before the smoke that they had made had covered the mountain, forming the table cloth cloud

2. The African legend of Umlindi Wemingizimu (Watcher of the South): In Xhosa legend, Djobela - the Earth Goddess turned mighty giants, placed in the four corners of the earth, into mountains to guard the world. The greatest giant of them all – Umlindi Welingizunu was Table Mountain, the Watcher of the South.

3. The Portuguese myth of Adamastor: The story of the mythical monster Adamastor, the grisly spirit of the Cape of Storms, is told by the Portuguese poet Camoens in the 1500s. Camoens tells it like this: As Vasco da Gama and his fleet approached the Cape a dark, ominous cloud (the Large Magellanic Cloud galaxy) appeared overhead taking the shape of a monstrous human figure who reproached the voyagers for venturing into the seas and prophesized that disaster would befall anyone who dared round the Cape of Storms. The monster tells the frightened mariners that he is Adamastor who, in classical myth, sought to overthrow the gods. However, Adamastor was punished by the gods who metamorphosed the monster into a mountain and set it at Cape Point to guard over the southern seas.[2]