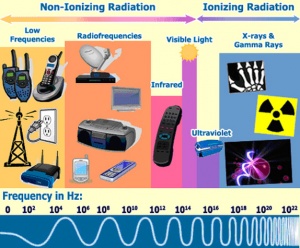 Extremely low frequency (ELF) is the ITU designation for electromagnetic radiation (radio waves) with frequencies from 3 to 30 Hz, and corresponding wavelengths from 100,000 to 10,000 kilometers.ELF waves can also penetrate significant distances into earth or rock, and "through-the-earth" underground mine communication systems use frequencies of 300 to 3000 Hz. The frequency of alternating current flowing in electric power grids, 50 or 60 Hz, also falls within the ELF band, making power grids an unintentional source of ELF radiation.

High-power extremely-low-frequency Radio Waves Frequencies with electric field levels in the low kV/m range are known to induce perceivable currents within the human body that create an annoying tingling sensation. These currents will typically flow to ground through a body contact surface such as the feet, or arc to ground where the body is well insulated.[1]

The best understood biological effect of electromagnetic fields is to cause dielectric heating. For example, touching or standing around an antenna while a high-power transmitter is in operation can cause severe burns. These are exactly the kind of burns that would be caused inside a microwave oven. This heating effect varies with the power and the frequency of the electromagnetic energy. Obviously when we recognize that we are electromagnetic beings, variations of frequencies that we are exposed have a range of impacts, from extremely harmful or positive effects made to our Lightbody, Consciousness and state of health.

Electronic harassment is the purported use of electromagnetic waves to harass, terrorize or Mind Control a victim. Psychologists have identified evidence of auditory hallucinations, delusional disorders or other mental illnesses in online communities supporting those who claim to be targeted.Individuals suffering from auditory hallucinations, delusional disorders or other mental illness have claimed that government agents make use of electric fields, microwaves (such as the microwave auditory effect) and radar to transmit sounds and thoughts into their heads, referring to technology that they say can achieve this as "voice to skull" or "V2K" after an obsolete military designation.[2]

Consciousness Sweeps are on and off planet NAA psychotronic warfare technology transmitted through Extremely low frequency (ELF), GWEN, and Radio Waves directed into the planetary body and earth surface in order to influence the Unconscious Mind (1st Chakra), neurological system, and brain of the collective race mind of humanity.

The technology employs Satellite-delivered (ELF) Extra Low Frequencies to communicate voice-to-skull transmissions. This produces delusional or schizophrenic related symptoms, such as hearing voices. ELF radio signals are used to communicate with Naval Submarines deep below the oceans' surfaces. These frequencies can pinpoint a target anywhere on Earth and can penetrate water, rock, concrete and other dense matter. The brain is composed of neurons (wires) and is powered by low electrical currents. Much like insects communicate with non-contact antenna, humans can communicate with radio transceivers. Each person has a unique genetic code (DNA) each of has our own distinct radio frequencies. Find the frequencies and a terror technician, such as those operatives employed by the CIA's Project MKUltra, can communicate directly into the brain. Remote Neural Monitoring is commonly used by handlers to control MILABS or those recruited to work covert military operations.

ELF and Mind Control is without a doubt, the most dangerous and deadly weapon of psychological warfare affecting people across America today. ELF is a high tech weapon abbreviated for Extreme Low Frequency signals which mimic natural brain waves. It is not only used to brainwash and control people, it's used to physically attack them as well.Implants and mind control technology are not simply the creation of paranoid conspiracy theorists, nor are they the stuff of science fiction based on imagination. In fact what is science fiction? It's the future foretold. Is there anything really fiction about most of the fiction we're seeing today? Truth is often masked under the term fiction so that you won't think it's real when often it indeed is. Implants and mind control technology are real: an established, certifiable fact that the media won't tell you about. The technology exists, the hardware is in place, the patents are on record and the agencies to run and control it are in and have been in place.[3] All technological warfare used against humanity, sources back to the NAA and their Archontic Deception Strategy.

The physical human body emits electromagnetic waves, and the signals used to control most brain and bodily functions exist in the extremely low frequency scale. Extremely low frequency (ELF) is the designation for electromagnetic radiation (radio waves) in the scale of frequencies from 3 to 300 Hz, and corresponding wavelengths. ELF waves can also penetrate significant distances into earth or rock, going into the deep subterranean structures. The frequency of alternating current flowing in electric power grids, 50 or 60 Hz, also falls within the ELF band, making power grids another source of ELF radiation.

ELF’s can be easily sent out through a variety of technologies and are used as a method of electronic harassment towards many human beings. Electronic harassment is the use of electromagnetic waves to harass, terrorize or mind control a victim. One form of Electronic harassment is Consciousness Sweeps. These are on and off planet NAA psychotronic warfare technology transmitted through Extremely low frequency (ELF), GWEN, and Radio Waves. These electromagnetic signals are directed into the planetary body and earth surface in order to influence the Unconscious Mind and control the neurological system and brain, of the collective race mind of humanity.

Mind Slide programming is when a human being completely ignores unapproved words, terms or issues that involve their own enslavement or uncovering truth in the reality, even if they come face to face with it. Mind Slides are a form of mind control and consciousness sweeping designed to erase memories that can be implemented through low frequency radio waves. These directed transmissions form frequency bands that transmit into the person’s Unconscious Mind through their bio-energetic field, generally making them suggestible to certain destructive thoughtforms (suicide, pedophilia, sex and drug addiction, killing people, etc.).

ELF combined with Mind Control is without a doubt, the most dangerous and deadly weapon of psychological warfare designed to control and enslave people across the globe. Extremely low frequency signals are used as a high technology weapon, which mimics natural brain waves. ELF is not only used to brainwash and take over people’s minds, it is used to physically attack them as well. Implants and mind control technology are real, the technology exists and the hardware has been in place for many years. All hidden technological warfare used against humanity, sources back to the NAA and their Archontic Deception Strategy, no matter who is carrying out the covert agenda or top secret orders.

The human body is a crystal oscillator and frequency resonator, which unconsciously picks up and absorbs many different ELF’s and Radio Waves, depending on what station of frequency and consciousness that person is tuned in to. Thus, we need to understand the Spectrum of Frequency, in the electromagnetic wave spectrum, and be aware of ELF’s and radio frequency impacts, in order to help protect ourselves from electronic harassment by understanding what is being transmitted into the environment. When we learn how to clear Negative Ego and identify spiritually abusive behaviors, we can reprogram the negative ego to spiritually healthy thoughts, and this helps us to uncover the contents of our unconscious mind. Remember that the most common forms of mind control are aimed at the Unconscious Mind. Learn to communicate with your unconscious mind, clear negative ego, raise your Frequency, and then you will learn how to become immune to mind control transmissions. The most important point about psychological warfare and mind control weapons is; it is only effective on those who are unaware it is being done to them. Once someone knows that they are being targeted with mind control technology, the effectiveness is forever lost.[5]