Equator in the map of Earth 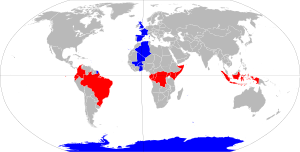 In spatial (3D) geometry, as applied in astronomy, the equator of a rotating spheroid (such as a planet) is the parallel (circle of latitude) at which latitude is defined to be 0°. It is the imaginary line on the spheroid, equidistant from its poles, dividing it into northern and southern hemispheres. In other words, it is the intersection of the spheroid with the plane perpendicular to its axis of rotation and midway between its geographical poles.

When the Sun is directly above the Earth's equator (on the equinoxes of approximately March 20 and September 23), sunlight shines perpendicular to the Earth's axis of rotation, and all latitudes have a 12-hour day and 12-hour night. On and near the equator sunlight comes from almost directly above every day year-round, and thus the equator has a rather stable daytime temperature the whole year.

The latitude of the Earth's equator is, by definition, 0° (zero degrees) of arc. The equator is one of the five notable circles of latitude on Earth; the other four are both polar circles (the Arctic Circle and the Antarctic Circle) and both tropical circles (the Tropic of Cancer and the Tropic of Capricorn). The equator is the only line of latitude which is also a great circle—that is, one whose plane passes through the center of the globe. The plane of Earth's equator, when projected outwards to the celestial sphere, defines the celestial equator.

In the cycle of Earth's seasons, the equatorial plane runs through the Sun twice per year: on the equinoxes in March and September. To a person on Earth, the Sun appears to travel above the equator (or along the celestial equator) at these times. Light rays from the Sun's center are perpendicular to Earth's surface at the point of solar noon on the equator.

Locations on the equator experience the shortest sunrises and sunsets because the Sun's daily path is nearly perpendicular to the horizon for most of the year. The length of daylight (sunrise to sunset) is almost constant throughout the year; it is about 14 minutes longer than nighttime due to atmospheric refraction and the fact that sunrise begins (or sunset ends) as the upper limb, not the center, of the Sun's disk contacts the horizon.

Sites near the equator, such as the Guiana Space Centre in Kourou, French Guiana, are good locations for spaceports as they have the fastest rotational speed of any latitude, 460 m (1,509 ft)/sec. The added velocity reduces the fuel needed to launch spacecraft eastward (in the direction of Earth's rotation) to orbit, while simultaneously avoiding costly maneuvers to flatten inclination during missions such as the Apollo moon landings.

The precise location of the equator is not truly fixed; the true equatorial plane is perpendicular to the Earth's rotation axis, which drifts about 9 metres (30 ft) during a year. This effect must be accounted for in detailed geophysical measurements.[citation needed]

Geological samples show the equator significantly changed positions between 12 and 48 million years ago, as sediment deposited by ocean thermal currents at the equator have shifted. The deposits by thermal currents are determined by the axis of the earth, which determines solar coverage of the Earth's surface. Changes in the Earth axis can also be observed in the geographic layout of volcanic island chains, which are created by shifting hot spots under the Earth's crust as the axis and crust move. This correlates with the Indian plate crashing into Asia as well as the Himalayan uplift.[1]