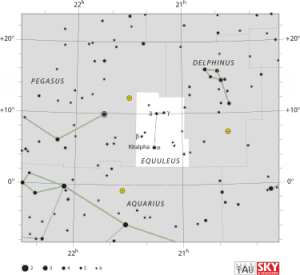 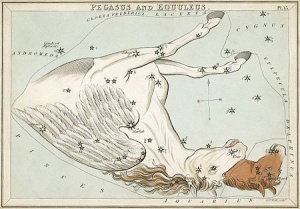 In Greek mythology, one myth associates Equuleus with the foal Celeris (meaning "swiftness" or "speed"), who was the offspring or brother of the winged horse Pegasus. Celeris was given to Castor by Mercury. Other myths say that Equuleus is the horse struck from Poseidon's trident, during the contest between him and Athena when deciding which would be the superior. Because this section of stars rises before Pegasus, it is often called Equus Primus, or the First Horse. Equuleus is also linked to the story of Philyra and Saturn.Created by Hipparchus and included by Ptolemy, it abuts Pegasus; unlike the larger horse it is depicted as a horse's head alone.

Equuleus is the second smallest constellation in the Northern Hemisphere, tucked between the head of Pegasus and the dolphin, Delphinus. There is no certain legend applied to Equuleus and it is supposedly created by the second-century Greek astronomer Ptolemy because it was added to his Algamest, though according to Geminos (130 - 60 B.C.) it was created by Hipparchos (Hipparchus), the Greek astronomer who lived around 190-120 B.C. Hipparchus mapped the position of 850 stars in the earliest known star chart. His observations of the heavens form the basis of Ptolemy's geocentric cosmology [AHD] [Allen argues on p.218 of Star Names that because Ptolemy did not mention the star near the south pole, Achernar, that his catalogue was not based upon original observations, but drawn from the now lost catalogue of Hipparchos]. Hipparchos is also credited with discovering the precession of the equinoxes, or as Allen believes (p.209), may have been merely the publisher of that discovery made by the Egyptians, or perhaps adopted by them from Chaldaea.[2]