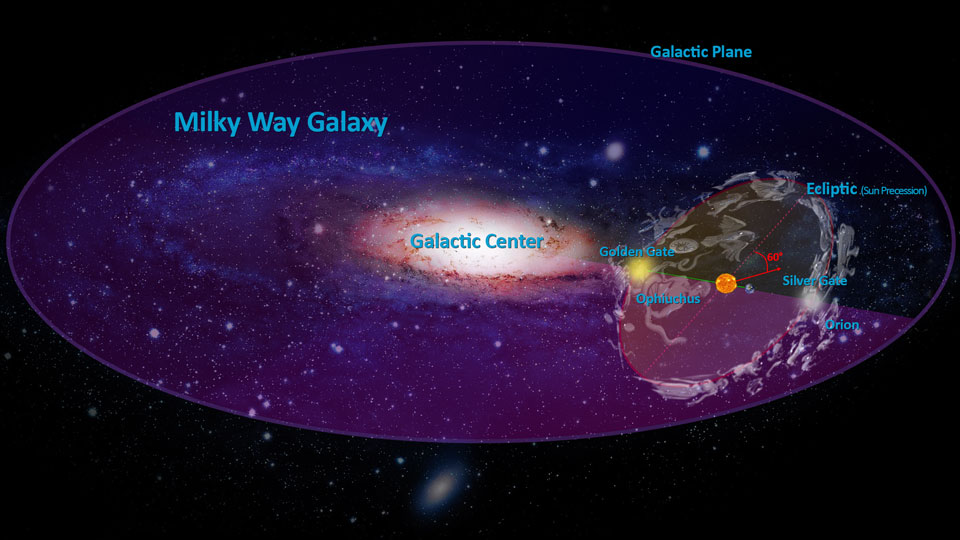 We all incarnate as earthly beings that evolve through the Precession of the Equinoxes. This takes us through the Consciousness realms moving through the Ecliptic path of the Gate of Man to eventually complete the evolution cycle, which intersects at the Galactic Center. Once we unify the consciousness experiences through the Gate of Man intersecting with the Galactic Equator at Ophiuchus’ feet, we are potentially given access to The Golden Gate. This allows us to proceed on the Ascension path to become resurrected eternal spiritual beings unified with the Cosmic Holy Spirit. From our solar system the Galactic Center lies visually along a line that passes through The Golden Gate. This is the Gate to Eternal Life which pours out the Universal Elixir that opens at the end of Precession Cycles.

The Golden Gate is located on the circuit path, where the two great celestial spheres intersect together that create four quadrants. The quadrant is one of four circular sectors in the equal division of the planetary sphere. The first great circuit is the path of the Sun through the zodiac made in its annual cycle. The other is the circle path made from the center of our Milky Way galaxy called the galactic equator or the Galactic Plane.[2]