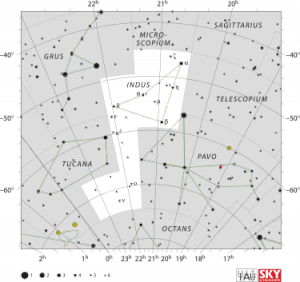 Indus is a constellation in the southern sky. Created in the late sixteenth century, it represents an Indian, a word that could refer at the time to any native of Asia or the Americas. The constellation was one of twelve created by Petrus Plancius from the observations of Pieter Dirkszoon Keyserand Frederick de Houtman[2] and it first appeared on a 35-cm diameter celestial globe published in 1597 (or 1598) in Amsterdam by Plancius with Jodocus Hondius. The first depiction of this constellation in a celestial atlas was inJohann Bayer's Uranometria of 1603. Plancius portrayed the figure as a nude male with arrows in both hands but no bow. [1]

The word Indus comes from the name of India. It originally derived from the river Indus that originates in Tibet and flows through Pakistan into the Arabian Sea. The ancient Greeks called this river Indos. Related words are: Hindu, indigo (Greek indikon, Latin indicum, 'from India', a blue dye from India, derived from the plantIndigofera), indium (the element is named after indigo), sandia (a watermelon), sendal (a fabric, from Greeksindon, fine linen), sindon (fine linen fabric).[2]