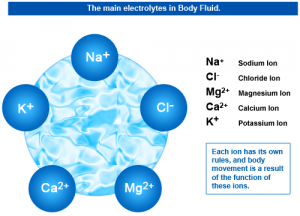 The human body is made up of atoms, Ions and molecules. Ions are atoms with extra electrons or missing electrons. When an atom is missing an electron or two, it has a positive charge. When an atom has an extra electron or two, it has a negative charge. The key players in creating the electrical energy within our body are structures called ions. Ions may exist in solid, liquid, or gaseous environments, although those in liquid are more common. Most ionic compounds fall in the category of chemicals called salts. Ions existing in a liquid state are Electrolytes. An electrolyte is any compound that, in solution, conducts electricity and is decomposed or electrolyzed by the electricity.

Ions can be created by either chemical or physical means through the process of ionization. The human body when subjected to strong Electromagnetic Signals, or activated Kundalini, is capable of biological ionization that can generate Plasma. In the ascending human body, ionization produces higher frequency Plasma light for continuing to build our liquid plasma spiritual body.

Thus, our cells are similar to miniature batteries and electrical generators. They conduct electricity, create Electromagnetic Signals, and are powered by a low level of electrical voltage. The nervous system uses electrical energy, termed nerve impulses, to transmit messages from one cell in the body to another cell in the body. Imbalances of any of these Ions, or inhibition of ion transport across the cell membranes, can lead to dysfunction in the conduction of electrical messages. This dysfunction quickly leads to a general body disturbance and loss of energetic stability in the bio-spiritual field. Additionally, this dysfunction skews internal messaging between the cells, blocks conduction of electrical messages in the nervous system and can alter or change Electromagnetic Signals in the body.[2]