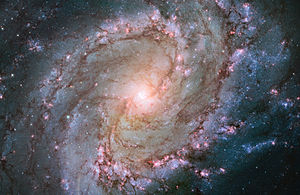 Nicolas Louis de Lacaille discovered M83 on February 23, 1752 at the Cape of Good Hope.[8] Charles Messier added it to his catalogue of nebulous objects (now known as the Messier Catalogue) in March 1781.

On 16 June 2008 NASA's Galaxy Evolution Explorer project reported finding large numbers of new stars in the outer reaches of the galaxy. It had hitherto been thought that these areas lacked the materials necessary for star formation

M83 is at the center of one of two subgroups within the Centaurus A/M83 Group, a nearby galaxy group. Centaurus A is at the center of the other subgroup. These two groups are sometimes identified as one group[and sometimes identified as two groups.[However, the galaxies around Centaurus A and the galaxies around M83 are physically close to each other, and both subgroups appear not to be moving relative to each other. [1]