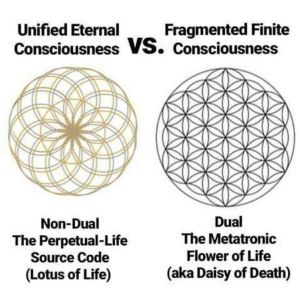 Metatronic Implants are Metatronic Reversals connect to Metatronic Implants in the shadow body or Negative Form that are designed to reverse and drain life force out of the earth body and the human body. The shadow body or Negative Form must be cleared from the human Lightbody in order to reconnect the ascending potential of the twelfth dimensional template of the human body. This unnatural configuration was built by the NAA via Alien Machinery that uses Artificial intelligence to parasitize the earth's life force to achieve immortality, and this organized structure is referred to as the Tree of Artificial Life, or the Black Tree of Life.

Whoever controls the Mind controls the body, mind and Soul. Alien Implants are used to Mind Control the masses to form socially acceptable belief systems and shape anti-human value systems which are used to condition humanity to accept spiritual abuse from the Negative Aliens and to self enforce their thought systems of hierarchical enslavement and fear. This is a divide and conquer strategy of the planet and humanity.

Alien implants work in the human body similarly as the chemical process of geo-engineering that is spraying chemtrails in the skies to manipulate or control forces in physical matter. The construction and raw substances used in Alien Implants are vast and some unknown, they can be made of biological material, synthetic material, etheric substances in the Lightbody or programmed nanobots (Nanites) used in Artificial intelligence technologies. Alien implants are a bio-engineering technology designed to shape the human body into the Mind Control submission to NAA agendas, while chemical (nanoparticle) geo-engineering is used to control the weather by harming the ozone layer and create excessive methane gases.

Splitter Tech is a type of AI encoding that run as a Mind Control script that is embedded into a variety of types of media, such as written words, spoken words of an infected individual, video or audio recordings, that can pass on that same scripted code to another person that resonates with that same frequency or information. It reveals a profile that is commonly observed in very academic or intellectually developed people, and tends to be attached to highly mentalized persons with dominating Negative Egos, judgmental perceptions and little to no heart opening. When a person is aware of the NAA and is also aware of the fact that Controller forces have a Psychopathic personality, this means they have Lack of Empathy, and no true developed Compassion for others, as they do not have a Soul, and thus cannot experience any higher emotional spectrum. They are indeed, heart-less, and unable to feel emotions and ruled by instinctual forces.