The Controllers have zero power over you (one's thoughts and emotional state) when you are outside of their frequency reach by maintaining neutral balance or the Observer Point. Being in the Observer role also means that you are fully present in the Now Moment, which can also be referred to as Mindfulness.

Mindfulness is the psychological process of bringing one's attention to experiences occurring in the present moment, which one can develop through the practice of Meditation and through negative ego clearing and mental discipline. Mindfulness is derived from sati, a significant element of Buddhist traditions, and based on Zen, Vipassanā, and Tibetan meditation techniques. [1]

If you stay out of the Negative Ego's Mind Control program that tends to trigger extreme mental and emotional polarity via ongoing inferior and superior thought forms, it is very hard for external forces of Mind Control to continually manipulate or gain control over you. The Controllers have no access to control Now Moment consciousness and do not understand the synchronicity and self-organization of the God Force in Action, through the Law of Compassion that enacts the Compassionate Witness. When you are capable to maintain and then embody a level of inner and outer Energetic Balance (through maintaining the observer with no attachment to outcome) God Forces and spirit can help through communications that access your Spiritual Guidance System that can bring resolution, reconciliation and peace to the most despairing of circumstances. Remember Fear closes the door to God Force while holding the inner and outer energetic balance (with Peace and Love) opens it. [2]

Single-mindedness has to do with the power of focus. Your ability to focus is ultimately your biggest ally in accomplishing tasks and projects. With practice this is an ability one can develop. Your level of achievement and success depends upon it.

Define single-mindedness: It is an adjective meaning: 1) Determined 2) Having one overriding purpose or goal. 3) Steadfast; resolute.

Now let's define focus. 1) The concentration of attention or energy on something. The opposite of this would be "absent-minded", "scattered", or perhaps just "distracted."

Practicing Meditation and developing the observer point is the critical skill which can be learned, trained and developed to discipline an unruly ego mind. With an unruly and undisciplined mind one cannot reach higher consciousness and access higher sensory perception. The process is one of self-observation and gaining increased self-awareness. Through dedicated observation of the self and gradually discerning between these functioning aspects of the mind, one can attain the direct experience of the consciousness they are. The still point of which this consciousness connects to in the parts of our mind is that which forms all of our thoughts, emotions, and experiences that direct us through life.

To begin this process one must observe the functions of the mind and discern them in action and intend to return that part of that mind function, or thought back into the internal still point or neutral. As we observe the thought, action or behavior in ourselves externally, we source this as an aspect of our mind that is connected to the internal whole and return that thought to the still point of consciousness inside our heart.In the earlier stages this is the intention and goal of specific meditation to become aware of inner stillness without the mind interfering. Later it is a walking meditation in which every single thought, behavior and activity is witnessed by the Observer Point in the day to day activity. As this skill is developed this becomes possible with little to no effort to remain in the Observer Point. It is at this point a massive leap in higher consciousness and awareness of sentient forms may be experienced.[3]

Consistent Meditation practice is helpful in training an undisciplined and cluttered mind to develop higher Consciousness which allows one to develop Higher Sensory Perception. Developed HSP will not occur in most people with an untrained and undisciplined mind.Meditation can be applied in many different techniques, and is helpful for facilitating Forgiveness and letting go of negativity in many forms. In the early stages of developing meditation skill, sit and relax and learn to observe thoughts passing through without having attachment to them. Once you notice the “thought” pattern, let it go and bring your focus back to the Now Moment. This is called the Neutral Association or Observer Point.[4] 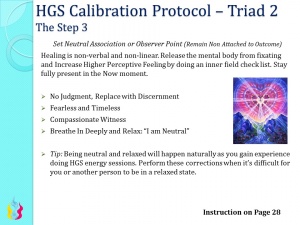 Tip: Being neutral and relaxed will happen naturally as you gain experience doing HGS energy sessions. Perform these corrections when it’s difficult for you or another person to be in a relaxed state.

Observer of Holographic Movie or Images

Transcript: A way to understand Observer Point is liken it to viewing a movie. If you become at all over-identified or emotionally connected to any thread in an archetype of drama, then you are pulled into the movie, pulled into the time and space of which the hologram is playing out. When observing the drama in Now Moment, one exists outside of the time fields, one is outside of the matrix of which is creating the dramas. When you are outside looking at it, as if it is a movie, you are not in the same time space field where this particular event is actually transpiring, and that's where one needs to stay when viewing Timelines.

This is the same principles in working with some of the Galactic Wars and many of the challenges that we may see in the higher planes. I have seen others remote viewers and Gridworkers throughout the years make a harsh mistake. The mistake is when we engage with the drama in another timeline as is, like you are in it now, and this is a major mistake. You have got to pull out. You cannot be in the timeline. As soon as you are feeling the emotional pull or the vestment or the attachment, whatever it is that pulls you into the timeline and you get sucked into the identity in dramas, now you can hurt yourself. The level of holding Observer Point is understanding that when you do this you are outside of the space where that event and that technology has power. When you are outside of it, that technology, whatever it is, whatever's going on, does not have power over you. As soon as you get sucked into it, now you become a part of the movie.

Thus, observing timelines is like watching a movie. You’re watching it as a movie and you recognize; this is a movie and there's a part of you observing the movie. This is the most effective way that you can be of support in the function of witnessing. The second that you identify with the movie and you become a part of the movie you can get hurt. This means you get implanted and a bunch of crap happens to you because now you have been sucked into the trauma or drama of the movie. This is the needed skill set as a practitioner or a steward of what we’re dealing with in the christos mission, and being able to master this skill is important in not only fieldwork, but as a session provider.

Understand that by holding neutrality and not responding does not mean that you don't care. Other people will not understand this. Over the years I have been told by others that have had to reconcile issues with me that they feel I'm monotonic. That I speak in monotone like I don't care or I just allow things to occur that are damaging because they see that I will not take a physical action. What I feel they're not understanding is exactly this point of observer. The wisdom is always in knowing what is your piece, when to take action and when to remain still and silent. The wisdom is in the application and direction of your personal energy, your consciousness, workign with the Law of Conservation at whatever time and space that you're working with, especially when clearing particular issues in the field.[5]