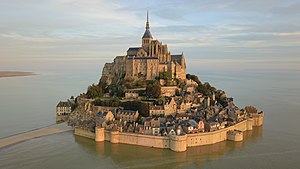 Le Mont-Saint-Michel is a tidal island and mainland commune in Normandy, France.

The commune's position—on an island just a few hundred metres from land—made it accessible at low tide to the many pilgrims to its abbey, but defensible as an incoming tide stranded, drove off, or drowned would-be assailants. The island remained unconquered during the Hundred Years' War; a small garrison fended off a full attack by the English in 1433. Louis XI recognised the reverse benefits of its natural defence and turned it into a prison. The abbey was used regularly as a prison during the Ancien Régime.

Mont Saint-Michel and its surrounding bay were inscribed on the UNESCO list of World Heritage Sites in 1979 for its unique aesthetic and importance as a medieval Christian site. It is visited by more than 3 million people each year. Over 60 buildings within the commune are protected in France as monuments historiques.

Plan of the mount by Eugène Viollet-le-Duc [2]

In the 11th century, William of Volpiano, the Italian architect who had built Fécamp Abbey in Normandy, was chosen by Richard II, Duke of Normandy, to be the building contractor. He designed the Romanesque church of the abbey, daringly placing the transept crossing at the top of the mount. Many underground crypts and chapels had to be built to compensate for this weight; these formed the basis for the supportive upward structure that can be seen today. Today Mont Saint-Michel is seen as a building of Romanesque architecture.[3]

The Monastic Fraternities of Jerusalem

Since 24 June 2001, following the appeal addressed to them in 2000 by Bishop Jacques Fihey, Bishop of Coutances and Avranches, a community of monks and nuns of the Monastic Fraternities of Jerusalem, sent from the mother-house of St-Gervais-et-St-Protais in Paris, have been living as a community on Mont Saint-Michel. They replaced the Benedictine monks who returned to the Mount in 1966. They are tenants of the centre for national monuments and are not involved in the management of the abbey.

The community has seven sisters and four brothers. They live the mission that the Church has entrusted to them in their own charism of being "in the heart of the world" to be "in the heart of God". Their life revolves around prayer, work and fraternal life. The community meets four times a day to recite the liturgical office in the abbey itself (or in the crypt of Notre-Dame des Trente Cierges in winter). In this way, the building keeps its original purpose as a place of prayer and singing the glory of God. The presence of the community attracts many visitors and pilgrims who come to join in the various liturgical celebrations.

In 2012, the community undertook the renovation of a house on the Mount, the Logis Saint-Abraham, which is used as a guest house for pilgrims on retreat.