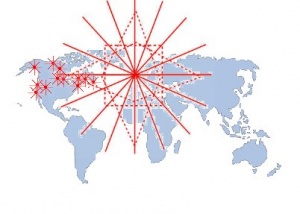 The NDC-grid is part of the larger Canadian so-called Michael-Mary Turnstile Matrix in which several smaller 'wheels' operate in North America. This control system now includes the White Eagle APIN and is used to broadcast subliminal mind-control scalar programmes. The NDC photosonic pulses block and reverse the polarity in some of the Earth's axiatonal ('vertical') and Ley line ('horizontal') grids, creating a 'checkerboard' of alternate active and dormant frequencies and named the Checkerboard Matrix. This has created a huge so-called 'checkerboard mutation' in all life on Earth what science calls junk DNA.

The NDC-grid can be used for poleshift, which was the intention, but it was recently disconnected from Wormwood by ET meditation techniques applied at certain specific sites by Indigo humans working with the Guardian ETs. However, the Anunnaki then utilised the 24 Crystal Temples until again the Indigo team deactivated the Crystal Temples one by one. Nevertheless, the NDC could still be effective by running off the additional NDC on parallel Earth (even planets have a separate polarity as with particles and antiparticles). Following this the NAA attempted to activate all of the Canadian Michael-Mary Turnstile Matrix and use it to re-link the Stonehenge NDC-grid to Wormwood to give sufficient power to blend the Falcon and Phoenix Grid wormholes and put all their APINs on line.[1]