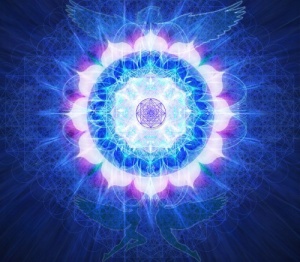 Hierogamic union is the Christos-Sophia and represents the perfected sacred marriage of the Risen Christ as one unified being in service to the Law of One and God. The Michael-Mary Reversal networks are designed to prevent sacred marriage by splitting apart the integration of the Third Eye Chakra, as the masculine principle, and the Crown Chakra, as the female principle. When these principles are united they activate the sacred marriage in the Soul Matrix and build the Wings in the Lightbody.

The Distorted False Family of Michael Masculine Archetype of Protector is actually an archetype of Enforcement of Will through Enslavement and Raper/Siphon of the Divine Feminine otherwise known as the False King of Tyranny. The Blue Sword or Michael-Mary Reversal is a structure in the hologram used to split apart and reverse both masculine (6D) frequencies as well as feminine (7D) Violet Ray frequencies at the 9D Atomic Doorway holographic blueprint level. They control the direction of these energies through the Iran Gate at the 10D level. Which means its use reverses the code so inner marriage and external sacred marriage, Hieros Gamos can NEVER truly transpire. This AA Michael distortion is like an artificial Holographic Insert placed into the 3-6-9 dimensional fields that splits apart masculine/feminine merging at all those dimensions. Since these are masculine principles as well as the particle physics governing that space, it means it severely damages the function of the mental bodies of human beings. It is through this the patriarchal domination has been enforced through the propagation of masculine enforcer, or the False King of Tyranny held in place by the Blue Flaming Sword of AA Michael. Ascension and Liberation from this plane requires a full merge of the masculine and feminine energies (6D Indigo and 7D Violet) coming into balance and Sacred Marriage. This structure was directly splitting apart not only the frequencies but feeding the continuation of distorted patriarchal domination programming into our masculine energy ( mental body functions) and especially directly into the masculine physical bodies. Honestly, it is no wonder most of the human race dies of a broken heart, as this kind of inner pain carried in our cells has truly been unbearable to our Soul.

Wing Trauma is directly connected to the Michael-Mary Reversal networks and the Alien Machinery placed in the planetary grids that split gender apart, which are anti-hierogamic technology. The result of this grid is to promote the splitting apart of the layers of sacred marriage that occur at the 6th and 7th dimensions, through the corruption of the Indigo and Violet Ray, which is the spiritual ascension process of Building Wings. These grids also feed the mind control belief systems that promote Sexual Misery in the human race, as well as hatred between the sexes. This level of the blockage and quarantine in the 6D layers is what is referred to as the 666 Seal and it’s also called the Curse of Yahweh, in connection to the results of what happened when we lost the Planetary Staff alignment due to the Yahweh Matrix. This is a genetic block in the sixth dimensional frequency layers residing within the 6D Indigo Ray and 7D Violet Ray Monad or oversoul bodies and it impacts our crown center. Essentially this relates to the trauma of having our Wings cut off from our lightbody, which meant most of humanity could not have sacred union, build an ascension vehicle, or travelling merkaba spirit body. This fact is what created the Fallen Angelics.

Hierogamic union represents the perfected sacred marriage between the inner male and female spirit, Christos-Sophia, which undergoes resurrection to emerge as the Risen Christos, one unified being in service to the Law of One and in full communion with the Godhead. The Michael-Mary Reversal networks are designed to prevent sacred marriage by splitting apart the integration of the third eye center, as the masculine principle, and the crown center, as the female principle. When these principles are united they activate the sacred marriage in the Soul Matrix and build the Wings in the Lightbody.

Recently, the process of building wings through the 6D-7D horizontal intersection on planet earth has revealed to be critical for correcting the planetary Horizontal Rod Pillar for the masculine principle. Hence this has been both a collective spiritual initiation in the masses to achieve the critical mass required in the planetary field, and the Guardian Gridworker project in which many Starseeds have been supporting since the rise of the Paliadorians during the Ophiuchus cycle five months ago.[1]

Disruptions in the Michael-Mary harnesses and their related grid networks, their hubs situated primarily in North America, is entwined with the Cathar rose lineages that have been troubled with conflicts in the planetary timelines. The Ley Lines hold embedded traumatic memories that are relevant to the distortions in the hologram of the KING and QUEEN archetypes and/or the sacred marriage between the masculine and feminine energies. Many unrevealed histories of unresolved war trauma and their genocide between humanity and the planetary invasion were used to split apart sacred marriage and gender, defile the Mother principle and Christ consciousness and promote Sexual Misery programs to the human race. [2]

These are the old Vesica Pisces programs using bi-polar geometry attached to the Jesus/Magdalene, Michael/Mary, Cathar/Essenes, Christos Templars lines (fleur di lis implants) leading to Quebec and Calgary, as well as the Roselines and St. Michael lines in the UK. These areas have been surfacing painful memories of planetary trauma into the energy field which include spiritual-energetic fragments, attachments and soul bodies. These are the causation memories of the many historical events which led to the mutation of the female and male union and their ‘archetypal identities” due to multiple tragic events. The energetic result may cause sympathies to the gender/sex organs if we are sensitive and a part of these lineages or feel connected to these archetypes. Many people and entities have been erupted from out of these spaces.

In Ascension context, the synthesizing of the pairs of energetic opposite into unity is also referred to as polarity integration, energetic synthesis or spiritual marriage. This also has the exact same meaning when applied togender unification which is the energetic balance between the masculine principle and feminine principle. To biologically evolve spiritually the energetic balance between the masculine and feminine energies within the self must be unified. See Gender Principle.